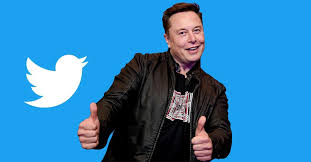 Elon Musk Buys off Twitter at a Hooping USD$44 B

WallnetNews/USA
It was all jubilations yesterday Monday as Tesla and SpaceX CEO Elon Must bought Twitter for roughly $44 billion, in which many saw as victory by the world’s richest man to take over the influential social network frequented by world leaders, celebrities and cultural trendsetters, according to New York Times.
Twitter agreed to sell itself to Mr. Musk for $54.20 a share, a 38 percent premium over the company’s share price this month before he revealed he was the firm’s single largest shareholder. It would be the largest deal to take a company private — something Mr. Musk has said he will do with Twitter in at least two decades, according to data compiled by Dealogic.
“Free speech is the bedrock of a functioning democracy, and Twitter is the digital town square where matters vital to the future of humanity are debated,” Musk said soon after striking the deal.
“I also want to make Twitter better than ever by enhancing the product with new features, making the algorithms open source to increase trust, defeating the spam bots, and authenticating all humans. Twitter has tremendous potential – I look forward to working with the company and the community of users to unlock it.”, Tweeted Elon.

The deal, which has been unanimously approved by Twitter’s board, is expected to close this year, subject to a vote of Twitter shareholders and certain regulatory approvals.
The blockbuster agreement caps what had seemed an improbable attempt by the famously mercurial Mr. Musk, 50, to buy the social media company — and immediately raises questions about what he will do with the platform and how his actions will affect online speech globally.
The billionaire, who has more than 83 million followers on Twitter and has romped across the service hurling gibes and memes, has repeatedly said he wants to “transform” the platform by promoting more free speech and giving users more control over what they see on it. By taking the company private, Mr. Musk could work on the service out of sight of the prying eyes of investors, regulators and others.
Yet scrutiny will likely be intense. Twitter is not the biggest social platform, it has more than 217 million daily users, compared with billions for Facebook and Instagram, but it has had an outsized role in shaping narratives around the world. Political leaders have used it as a megaphone, while companies, celebrities and others have employed it for image-making and brand building.

In recent years, Twitter has also become a lightning rod for controversy, as some users spread misinformation and other toxic content on the service. Former President Donald J. Trump frequently turned to Twitter to insult and inflame, before getting barred from the platform after the Jan. 6 riot at the Capitol last year. The company has repeatedly been forced to create policies on the fly to deal with unexpected situations. In a statement, Bret Taylor, Twitter’s chairman said the board had “conducted a thoughtful and comprehensive process to assess Elon’s proposal with a deliberate focus on value, certainty, and financing. The proposed transaction will deliver a substantial cash premium, and we believe it is the best path forward for Twitter’s stockholders.”
Musk himself has had a rocky relationship with online speech. This year, he tried to quash a Twitter account that tracked the movements of his private jet, citing personal and safety reasons. On Monday, he tweeted that he hoped his worst critics would remain on Twitter because “that is what free speech means.”

“Without any conditions for Musk to purchase Twitter, the platform’s community standards and recourse to ban users who violate those standards, Twitter could set a dangerous precedent for other social media companies to follow,” said Bridget Todd, director at UltraViolet, a women’s rights organization. “This is a massively slippery slope.”
Beyond speech issues, Twitter faces questions about its business. For years, the company has struggled to gain new users and to keep people coming back to the service. Its advertising business, which is the main way Twitter makes revenue, has been inconsistent. Twitter has not turned a profit for eight of the last 10 years according to New York Times.