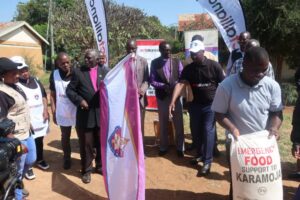 As part of efforts to respond to the looming hunger crisis in Karamoja sub-region, Church of Uganda in partnership with ACT Alliance, on Tuesday flagged off the distribution of relief food to support the people of Kotido and Kaabong districts which form part of North Karamoja Diocese.

The flag off of the 50 tonnes of maize flour, 18 tonnes of beans, silver fish and salt was presided over by the Rt Rev Joseph Abura, the Bishop of Karamoja Diocese who doubles as the Dean of the Province of Church of Uganda in the presence of Rt Rev James Nasak the Bishop of North Karamoja, staff of Church of Uganda’s Provincial Secretariat, members of ACT Alliance, local leaders and the Diocesan leadership at the Diocesan office in Kotido.

While flagging off the relief items, Bishop Abura commended the Archbishop of the Church of Uganda, The Most Rev Dr Stephen Samuel Kaziimba Mugalu for championing the mobilization of resources for purchasing the items to be supplied and those that are already being supplied in other areas of Karamoja.

“This food came as a result of the wide voice of the Archbishop of the Church of Uganda to the people of Uganda and partners when we realized through reports from the District, Parliament and social media that hunger had affected our people. What I have flagged off today on his behalf was donated by ACT Alliance through the Church of Uganda,” Bishop Abura said.

He added, “We have the other food which was contributed by the Dioceses of Church of Uganda through Retired Bishop Johnson Gakumba whom the Archbishop requested to stand in for him. This food has also arrived. It includes 40 tons of maize flour to Karamoja Diocese in Moroto and 40 tons of food and other items in Kotido,” He added.

Bishop Abura further said: “I want to tell the world, particularly Ugandans, that the harvest here this year is very poor. We are expecting more hungry people next year. Come May, June, July and August 2023, there is going to be more hunger here because the army worm completely finished the first crops.”

“This food which has just come now has come to relieve our people who suffered from hunger. We lost people to hunger in big numbers. The report from Kotido district indicates that there are 1,680 people who died of hunger. During our pastoral work to the manyattas, we find children so malnourished, people very hungry, very thin and others dying in their houses and compounds ,” Bishop Nasak said.

He attributed the rising number of street children to the hunger in the area.

“When you go to these manyattas, you find that a number of children who lack what to eat have fled to towns. Like in Kotido Municipality, there are a lot of street children and the criminality has also gone high because they are stealing food and money from people,”  Bishop Nasak said.

Rev. Andrew Agaba, the Director of Household and Community Transformation (HCT) said, the response came as a result of news about Karamoja which compelled the Directorate under the Archbishop’s stewardship to make an appeal to ACT Alliance for Rapid Response Funds which they fulfilled with USD100,000.

He further said, Kotido and Kaabong were selected because they are at the extreme end of Karamoja and are normally left out in many response programs.

The relief items will go to 2000 households and will target elderly and child headed families, malnourished children, pregnant women and lactating mothers, people with special needs including those living with HIV and Tuberculosis and women.

According to Rev. Agaba, each household will receive 25kgs of posho, 8kgs of beans, 1kg salt and 3kgs of silver fish only for households with malnourished children. 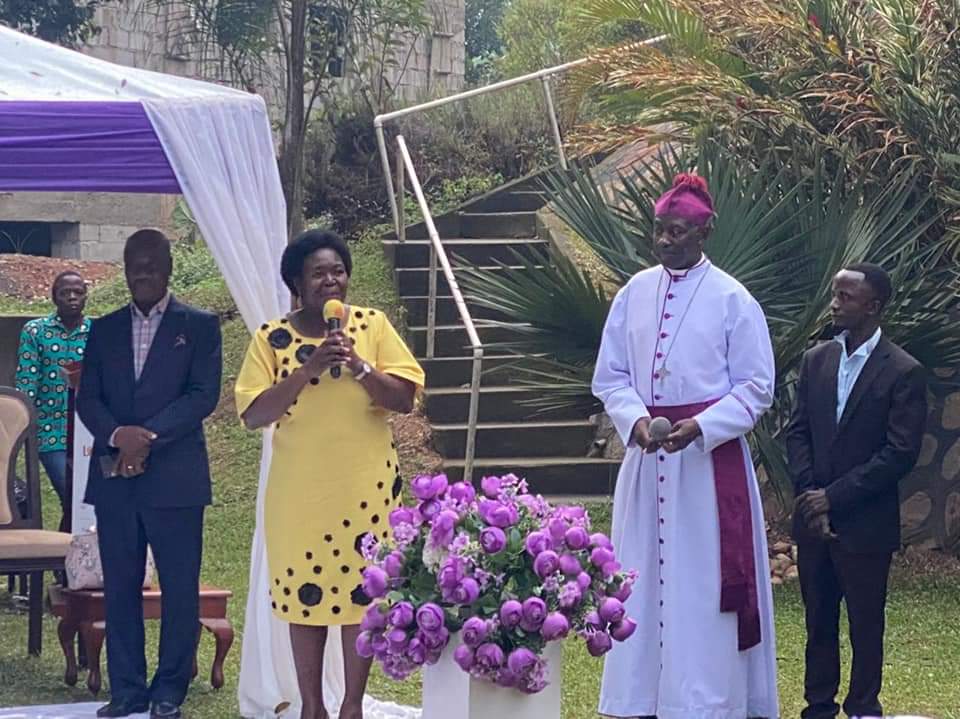 By Our Reporter Kampala – The minister of energy and mineral development, Hon. Dr. Ruth Nankabirwa has revealed that the government … 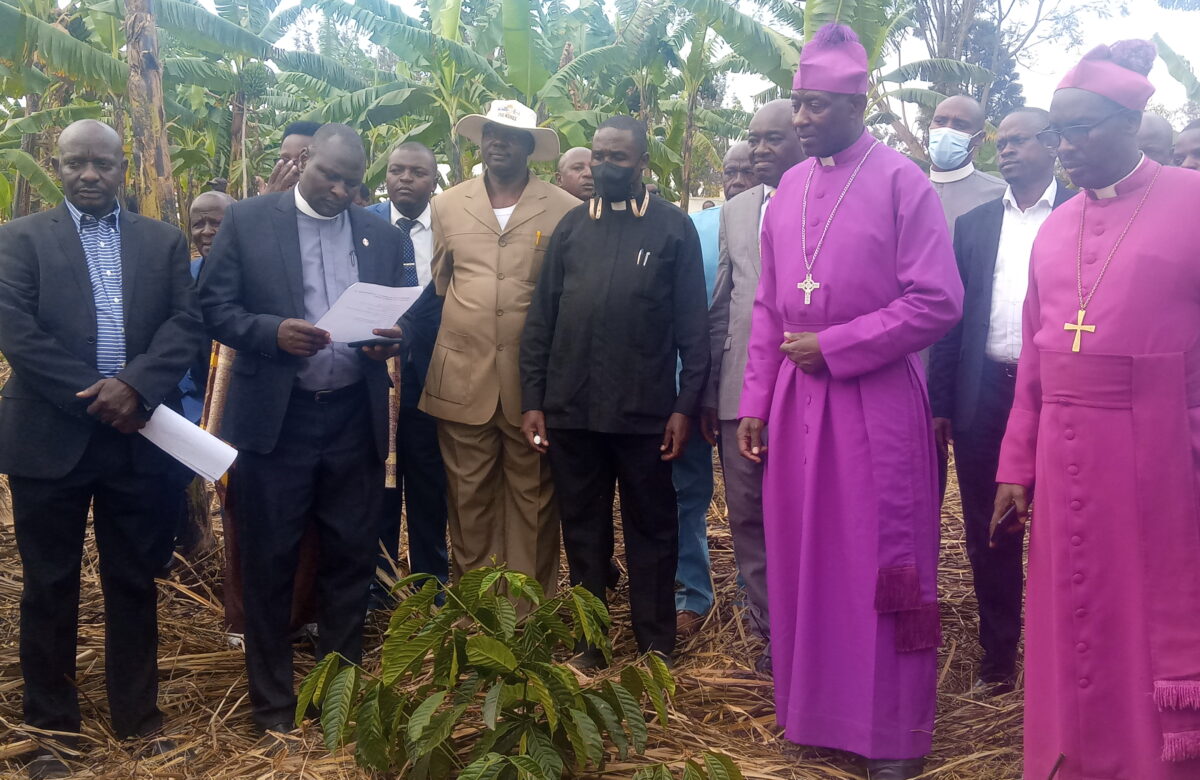 By Our Reporter Mbarara – The Archbishop for the province of Church of Uganda, Steven Samuel Kaziimba Mugalu has warned all… 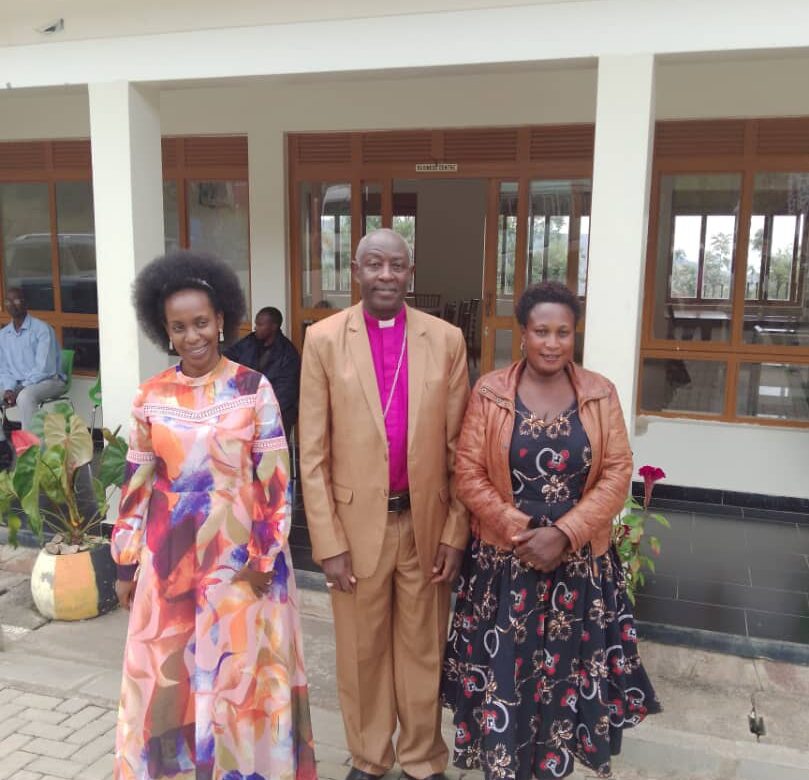 By Libino Byamukama KABALE – AS Christians warm up for the consecration ceremony of the New Bishop elect, Rev. Gaddie Akanjuna,…