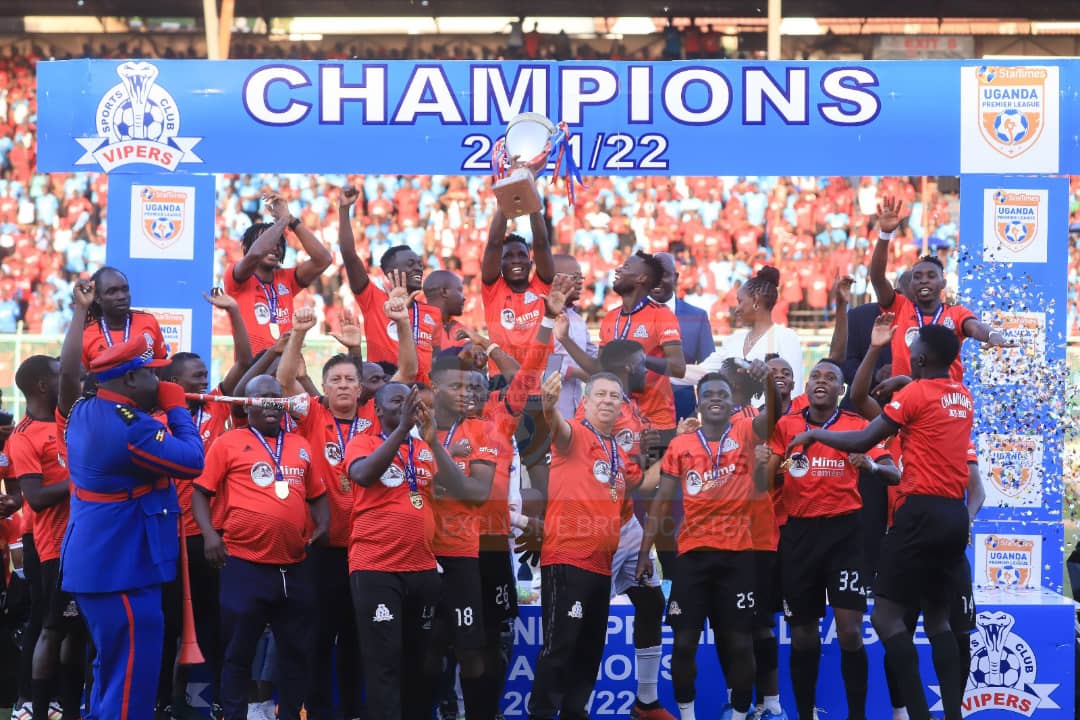 2021/22 StarTimes Uganda Premier League (UPL) winners Vipers SC ended the season on a high as they thrashed already relegated Police FC 5-0 in the final game of the season at St Mary’s Stadium, Kitende.

Vipers who were already champions even before kick-off ensured that they went ahead to hoist the trophy after a commanding victory infront of their home fans and Police who went down a while ago had to pay the prize.

Two braces from Milton Karisa and Bobosi Byaruhanga plus a Yunus Sentamu goal earned the Venoms a well deserved season finale in a campaign they dominated the rest of the sides.

Karisa’s opener was the difference at the break as the home side dominated proceedings.

Still in the first interval, Vipers had chances to extend their lead but seemingly struggled to find the back of the net. Among others, Paul Mucureezi was almost on target but Police custodian Halid Lwaliwa thumped the ball over the crossbar.

Police best chance came when Frank Kalanda attempted a shot but Vipers goalie Denis Kiggundu was equal to the task.

Earlier in the second half, Karisa grabbed his brace off a long shot setting up a tone for Vipers to drop more goals.

Bobosi would later make it three for Vipers before doubling his tally later in the game.

With just a minute to the end of the game, Sentamu made it five for the home team setting up the home fans ablaze as they eagerly awaited coronation. It was his 14th of the season.

However, at the same game, the legend of the game, Tony Mawejje, a Police FC and former national team midfielder received a standing ovation in the 6th minute (representing his jersey number) as he officially retired from active football.

Government Won’t Introduce New Taxes In the Next…