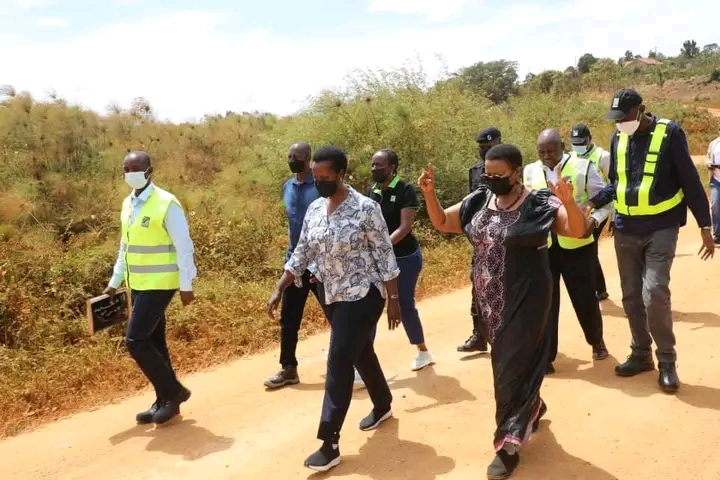 Sembabule — The executive director of Uganda National Roads Authority (UNRA)  Allen Kagina, accompanied by the state ministers for health Hon. Anifa Kawooya and engineers from UNRA on Thursday this week, inspected the road network in Sembabule in a bid to address challenges of the road network in the district.

The team inspected the 110-kilometre Kanoni-Sembabule-Villa Maria road which was upgraded from gravel to paved standard and completed in 2018. The road consists of two sections, the Kanoni-Sembabule section; which starts at Kanoni in Gomba District and stretches through Bukalagi, Bukakunda, Kabulasoke, Maddu, Kasozi to Sembabule town and the Sembabule-Villa Maria section which starts in Sembabule town and stretches trough Kakongolo, Butenga, Bukomansimbi town and ends at Katigondo/Villa Maria in Kalungu District.

The same project involved the upgrading of town roads from gravel to paved in the towns of Bukomansimbi, Sembabule and Gomba totaling 12.46 Kilometers. They also inspected the Kyabakuza, Mateete Kaliro road under UNRA maintenance.

Speaking during the inspection, Hon. Anifa Kawooya, commended the government of Uganda and UNRA for the work done in upgrading and maintenance of roads in the area noting that these roads are demonstrating positive social and economic impact. She however expressed her concern on some areas especially the Kyabakuza, Mateete Kaliro road. “This road is very crucial for the transportation of people and goods in this area. It however has potholes in various sections that make it unmotorable. The drainage system is also problematic” Kawoya said.

In response, to these concerns, the executive director UNRA Allen Kagina reiterated  Hon. Minister’s concerns noting that: “We are aware of these issues but have been dealing with budget constraints. However, I’m pleased to inform you that we shall be here by the end of this month to start maintenance works on the road” UNRA ED explained.

Kagina thanked residents for their cooperation and urged them to work with the government to maintain the roads. “Don’t dump rubbish in the drainage for example. Let’s work together to maintain our roads” she implored. During the visit, the UNRA team also inspected the progress of the upgrading of Masaka City roads. At a stopover in Kitovu, the Church leadership in Masaka expressed gratitude to the Government of Uganda for the road developments in the area.

Speaking on behalf of the Bishop of Masaka Catholic Diocese at Kitovu, Fr. Deus Luyimbazi expressed gratitude to Government for creating paved access to Our Lady of Sorrows Cathedral and Kitovu hospital. “We thank the government of Uganda and the UNRA team for creating better access to our Cathedral, Hospital and surrounding areas. This place gets a big number of visitors daily. We are happy that parishioners, students, patients and visitors from all over the country now have easier access to these services” He also commended UNRA for the good relationship they have maintained with residents during construction.

Also present was the Rt Rev. Henry Katumba Tamale, Bishop of Western Buganda in the Church of Uganda. Rt. Rev. Tamale thanked Government for the road works. “We are grateful that the government has done such a good job. We thank you for Masaka-Bukakata. This is a road that means so much for the economy of greater Masaka” said Bishop Katumba Tamale. He also thanked the team for the rehabilitation of Kako road, home to St. Paul’s Cathedral of the church of Uganda.

Upon completion, these roads will improve both the social and economic status of the people of Masaka City by reducing the dust in the city, enhance productivity and value addition, reducing vehicle operating costs and will greatly contribute to the ease of doing business in the city.