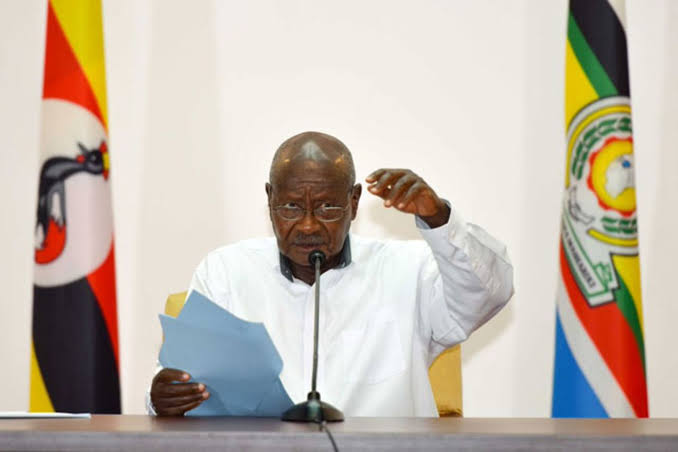 Ukraine war To Blame For The Rising Costs Of Commodities -Museveni

During the national address , the president pointed out that the recent rising costs of commodities is attributed to Ukraine war and post covid 19 recovery while addressing challenges faced by the country in the last 3 and a half years.

He said that a serious problem solver would be grouping the commodities into two clusters. The imported ones on one hand and the locally produced ones on the other hand. He however stressed that the idea of subsidy or removal of taxes from those commodities would lead to collapse. ” Let us take the example of petrol. A litre of petrol before the rise of prices in November 2021,was Ugx. 4,590 which meant USD 1.3at that time. A litre of petrol is now Ugx. 5,500 which means USD1.48. This is all with the tax. The more expensive litre of petrol (ey’obuseere), is doing two bad things: emptying the pockets of the consumers, but also emptying our national dollar reserves. We now have USD 4.5 billions in our Reserves. These are enough to support imports for 4.2 months.” the president emphasized in his televised speech.

The president further said that If we, as a country subsidize or even just remove the taxes on imported commodities, the level of consumption will either remain the same, but this time each litre taking more dollars, or actually increase. The dollar drain will now increase per litre and also, worse, people may buy more of this expensive commodity.
“the removal of taxes on some of the commodities, would mean tax loss to Government of: Ugx.1.53 trillion for petroleum, Ugx.1.15trillionfor diesel, Ugx. 520 billion for wheat. How, then, do we fund our budget for–roads, electricity, schools, medicine, security, etc.? There are items we do not tax –e.g. Medicine, raw materials, etc. It is, therefore, not true that we tax everything. The very crucial items, are not taxed. Therefore, removing taxes or subsidizing many of the imports is suicidal and a blunder” Museveni advised.

The president however pointed out two ways on how to deal with high commodity prices, “1.To use frugally these imported items (kukekereza, kwereembareemba)or kubyesonyiwa(get alternatives);2.To use our own raw-materials –such as sunflower oil and castor oil (enshoga-shoga) for soap as we wait for the expanded palm oil production which takes longer –sunflower takes only 4 months; for bread, we can use our banana and cassava flour for bread-making apart from eating the traditional foods”. He signed off by advising people to eat richer indigenous foods such as millet, bananas cooked in their skin, g.nuts, Peas, beef and finally cassava instead of wheat bread or rice which is rather expensive.