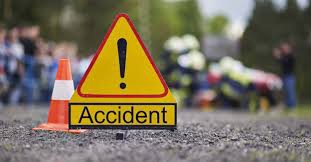 Libino Byamukama
KANUNGU — Police in Kanungu is  investigating circumstances under which a reckless boda boda rider caused death of an innocent 18 year old school student Akandinda Tonny who was a student of  st. Calos S.S and a resident of Burebane.
The fatal road accident Involved two motorcycles of Reg No- UEL 021V Bajaj boxer belonging to Mutamwebwa a resident of Burebane cell Western ward Kanungu town council and motorcycle reg. No UFH 723K Bajaj Boxer which was being ridden by an unknown motorist that is currently admites too. had one passenger known as Akandinda Tonny 18yrs a student at St. Calos SS and resident of Burebane cell .
According to Elly Maate, the kigezi Region Police spokes person, the accident happened at Burebane trading centre along Kanungu  Kihihi road.
It’s  further alleged that m/cycle Reg No- UEL 021V which was carrying a passenger joined the main road and knocked m/cycle reg No- UFH 723K  which was on the main road and this led to the fatality and injuries sustained.
Maate says the body was taken to Kanungu Health Centre IV for postmortem and scene was visited by Asp. Waako John,  and both Motocycles were towed to Kanungu police parking yard pending IOV inspection.
A case of fatal Road Accident has been registered at kanungu central police station under the reference No TAR 16/2022