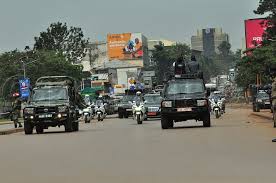 Three Injured as Presidential Convoy is Involved in an Accident

An accident occured on Monday along the northern bypass when a motorcycle, commonly known as Boda boda was allegedly knocked by the convoy of President Museveni on the road.

This incident happened at Ssentema when a boda boda rider that was carrying two other passengers  was allegedly knocked by the presidential convoy that was en-route to State House Entebbe.

“Whereas other vehicles had been stopped, the boda boda rider tried to move in front of one of the cars that had stopped to give way to the convoy. The rider rammed into the convoy,” an eyewitness said.

It is said that three people including the rider and the two passengers were injured and have since been rushed to Mulago and Mengo hospitals for medical attention.

Under the Traffic and Roads Safety Act, and the Highway Code, the presidential convoy has a right of way as stipulated  in the laws of the country.