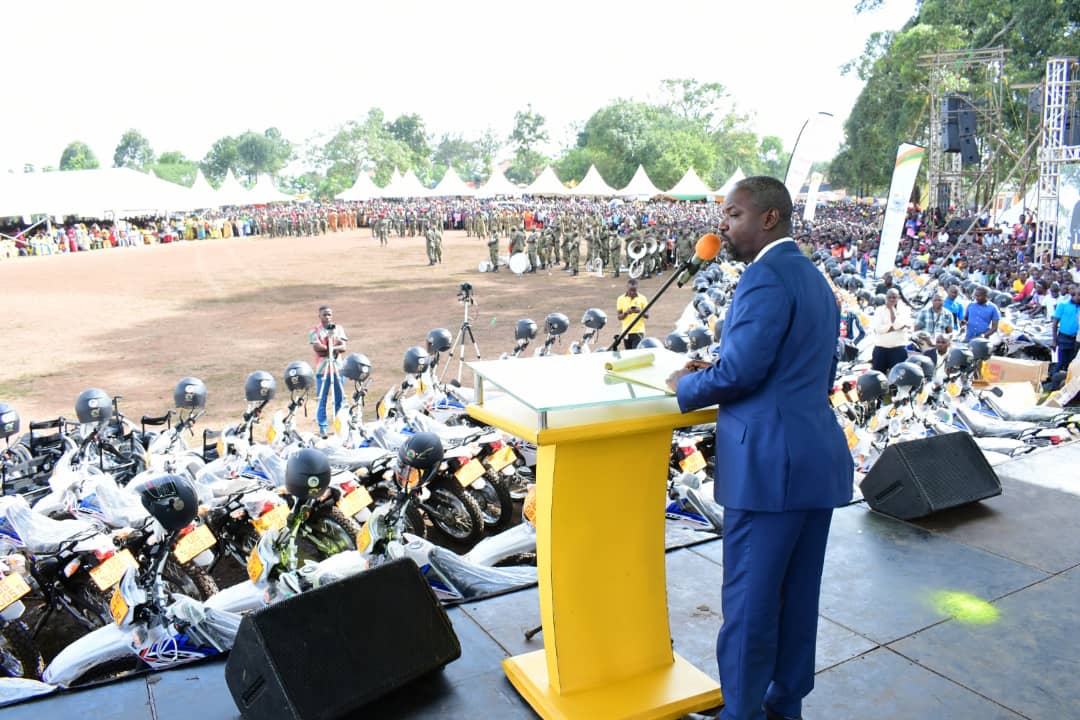 The Deputy Speaker of Parliament Thomas Tayebwa warned environmental activists opposed to the construction of the East African Crude Oil Pipeline (EACOP) that no amount of pressure will deter the government of Uganda from developing the Oil and Gas Sector.

Tayebwa sent the warning while officiating over a function at which Kakumiro District marked the International Women’s Day. The day is marked on March 8, but since the area woman MP Robinah Nabbanja participated in the National function, because of her position as Prime Minister, the District event was arranged for May 20.

He referred to a video clip that has recently been making rounds on social media where female activists are seen mobbing French President Emmanuel Macron to stop funding to Total Energies in implementing the EACOP project.

“There are people who are trying to frustrate the efforts of the Government of Uganda to develop the oil sector. I have seen a video going viral with some activists attacking the French President saying that they shouldn’t support Total” Tayebwa said.

Tayebwa who represented Speaker of Parliament Anita Among at the function which also doubled as fundraising drive for the construction of the ruling National Resistance Movement (NRM) party house in Kakumiro town, vowed that Parliament will not entertain any petition seeking reverse of decisions already taken.

“Prime Minister, I want to assure you that no one will use the Parliament of Uganda to frustrate the development of Oil. I want you colleagues to support the oil companies and the government to develop our pipeline so that Uganda can get out of poverty” added Tayebwa.

Parliament in Uganda in December last year passed the East African Crude Oil Pipeline (EACOP, Special provisions) bill into act of Parliament, which was later assented to by President Yoweri Museveni. The law is one of the instruments that have now drawn Uganda closer to its dream of making the first oil flow by 2025.

The law is a pillar in the implementation of the EACOP project in Uganda following a treaty signed between Uganda and Tanzania to let the EACOP Company fast track the pipeline construction.

The world’s longest pipeline measuring 1,443km will run from Hoima District in western Uganda to Tanga Port in Tanzania and it will be key to the joint venture Total Energies, China National Offshore Oil Company (CNOOC), government of Uganda and government of Tanzanai to realise extraction of oil.

Tough speaking Tayebwa insisted that the country will not fall to similar activism like it was in the case of the Bujagali Hydro Power plant that took long to kick off on grounds of conserving nature.

“Those making noise are part of the people who fought Bujagali. When the country went into darkness they abandoned us and we suffered. Now that they see our oil is about to start coming out, they say it is destructive. The whole of Africa contributes below 3% of emissions, now how do you say the Ugandan oil will be an environmental hazard and so they shouldn’t allow Total to construct the pipeline?” he wondered.

Uganda has 6.5 billion barrels of oil reserves in the Albertine region of which about 2.2 billion barrels is recoverable. Government has planned to use the proceeds for the Oil and Gas on modern infrastructure projects.