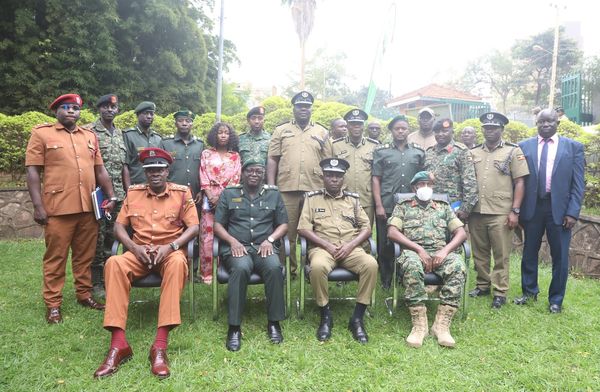 The Uganda Wildlife Authority (UWA), Uganda Police, Uganda Prisons and the Uganda Peoples’ Defence Forces (UPDF) confirmed their readiness to participate in the forthcoming Inter forces games (16th edition) due to be held at Queen Elizabeth conservation area in Kasese.

This was during a joint media launch of the 2022 games at Uganda Wildlife Authority headquarters in Kampala on (Wednesday) September 7th.

This year’s edition will run under the theme; “Inter-forces collaboration – A key to effective wildlife protection” and shall be hosted by the Uganda Wildlife Authority at the Queen Elizabeth National Park in the Western Region of Uganda.

This park, established in 1952 covers a total area of 1,978 km2, spanning the districts of Kasese, Kamwenge, Rubirizi, and Rukungiri.

“Uganda Police is more than ready to participate in all the eight disciplines identified for this year and we shall be fully in it and we pledge good working relations with our sister forces for continuity of these games.” Said Charles Birungi (AIGP).

“These games enhance cooperation beyond fieldwork of operations and its one element that unites us where more than 1000 personnel from different forces come together and share ideas with one another.” He added.

The Director said this year’s theme dubbed “Interforces Collaboration a Key to Effective Wildlife Protection” is very relevant since the forces are all obliged to protect the environment because of its importance to humanity.

He reaffirmed that at the back of our minds, it is everybody’s responsibility to protect wildlife and the environment in particular.

“As Police together with other stakeholders involved in the protection of wildlife, we shall provide protection and work towards achieving the theme set since its key for the future of this planet.”

The Uganda Wildlife Authority (UWA), Uganda Police (UPF), Uganda Prisons (UPS) and the Uganda Peoples’ Defence Forces (UPDF) will compete in eleven sports disciplines such as Football, Athletics, Boxing, Taekwondo, Volleyball , Netball and Darts  among others, all of which support talent development specifically among the youth and create employment opportunities.

Mwandha, hinted that the decision to host these games at Queen Elizabeth national park was to raise awareness about this nature conservation area.

“Uganda Wildlife Authority (UWA) made the decision to host the 2022 Inter-Forces Games at Queen Elizabeth National Park so that the people get to know more about this park and raise its awareness. We have prepared well and are ready to host these games. UWA is dedicated to sports development after a call from His Excellency President Yoweri Museveni to promote sports through the forces,” said Mwandha.

This year’s sporting event will be held in Queen Elizabeth National park at Mweya between September 22 to 30th 2022, its only athletics will be held on September 19th at Bombo Military Barracks and shooting in particular will take place at the Nyamugasani shooting range grounds.

Meanwhile, the grand opening will be convened on September 22nd by Rtd Colonel Tom Butime, the Minister of Tourism Wildlife and Antiquities at Uganda Wildlife Research and Training Institute, Katwe.

Kabale School Of Comprehensive Nursing Cleans Town Ahead Of…