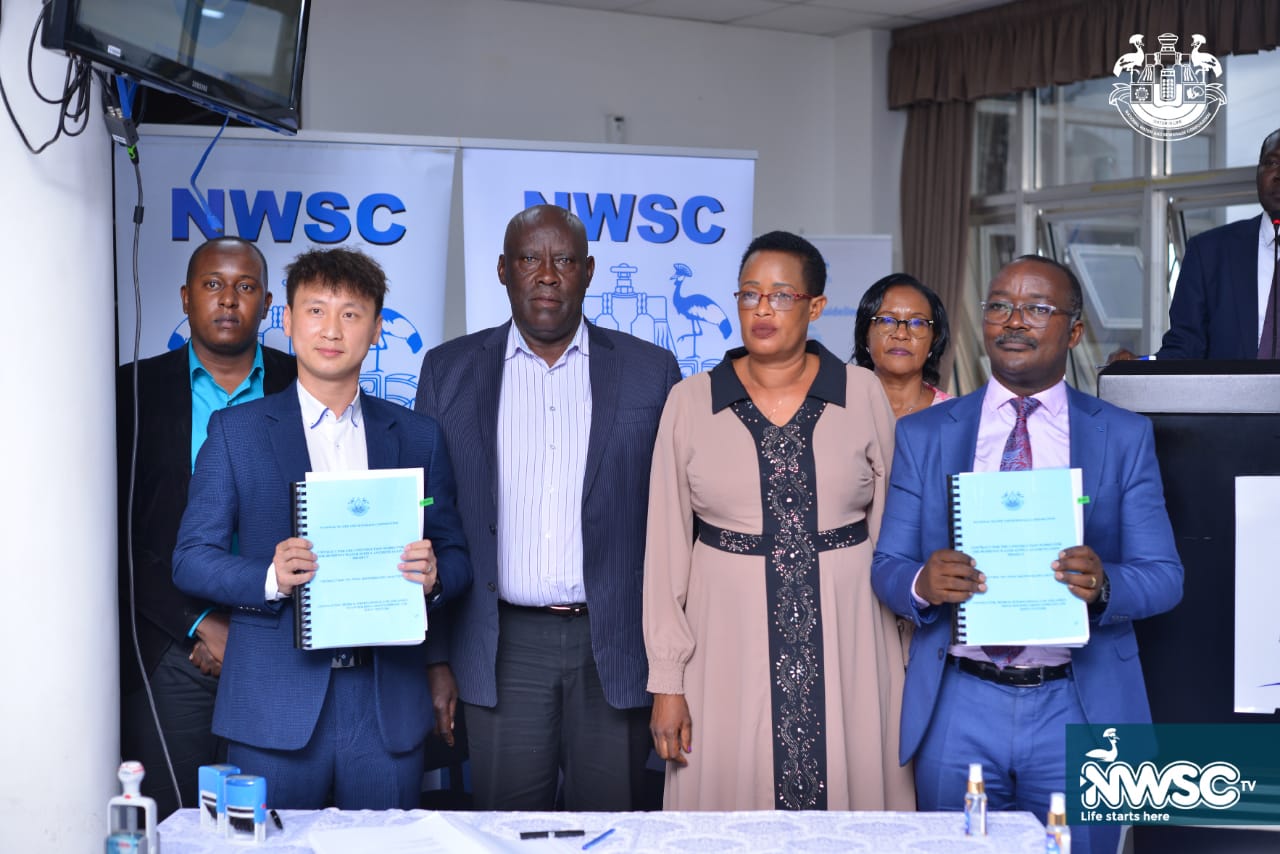 The Government of Uganda through National water and sewage cooperation (NWSC) has signed a contracts to boost water supply in Five water stress Districts of; Kyankwanzi, Bushenyi, Kalungu, Gulu and Isingiro districts. The contract agreement was signed on Tuesday at NWSC headquarters in Nakasero between Water and sanitation infrastructure development project (WATSAN). This is a part of its continuous mandate, National Water and Sewerage Corporation continues to implement a wide range of Water and sanitation (WATSAN) infrastructure development projects within its 263 towns of operation across the country.

The company recently secured market financing towards implementation of a number of WATSAN flagship projects.
The corporation is also implementing major projects funded by the Government of Uganda with financial support from development partners.

The project implementation is to ensure provision of safe water for human consumption and water for economic development focused on eradicating poverty. This is also in line with the government efforts deliberately aimed at fostering progress towards achieving the UN Sustainable Development Goals. The signing ceremony was attended by State for Water and Environment Hon. Aisha Sekindi as an official from the line Ministry and in witness of several district leaders from the beneficiary towns and representatives of development partners, contractors and consultants.

Speaking at the Signing ceremony, the Minister of State for Water and environment, Hon. Aisha Sekindi, said that the projects are timely, and will help improve acesss to safe water in the 5 districts, especially those under the cattle corridor. She underscored government’s commitment towards improved water and sanitation infrastructure across Uganda in line with NDPIII. Hon Sekindi commended NWSC for their commitment towards water for everyone acrosss the country and encouraged them to equally serve rural areas in the 5 districts. She urged water users to pay bills on time which subsequently helps NWSC to extend its services to more Ugandans. “In other areas people pay between Ushs 1000-2000. The Ministry of Water and Environment in partnership with NWSC and other development partners are working to ensure the provision of affordable clean and safe water to all Ugandans,” She added.

The NWSC Board Chair Eng. Dr. Prof Badru Kiggundu, who was in presence, also noted that the ceremony was a milestone in line with government’s mandate to; improve the water and sanitation infrastructure, as one of the major contributors to sustainable well being of the people of Uganda.

He thanked the Government of Uganda, Parliament, Ministry of Finance, Planning and Economic Development and other Development Partners who have successfully secured financing for the projects. He tasked the contractor to complete the project within time and cost as stipulated in the agreement.

NWSC Managing Director, Dr. Eng Silver Mugisha said that NWSC is an innovating vast engineering solutions to improve lives of the people of Uganda through the provision of clean safe water. He added that all the above projects were internally designed by NWSC engineers. According to Eng. Mugisha, water and environment protection are tandem as such, the utility has rolled out environmental protection initiatives aimed at conserving the environment. “NWSC is focused on institutional sustainability while looking at the overall business growth” he said. Mugisha explained that, Subsequently, the utility has set a target to achieve the following by 2025; to Increase assets from 3.9trillion to 6 trillion, Increase Connections from 900,000 to 1.2million connections, Serve over 25million Ugandans up from the current 18million people being served now. Improve customer satisfaction from the current 86% to 90% Improve Staff Satisfaction index from 78% to 90% among others.

Eng Mugisha emphasized that, the projects will be implemented under strong fundamentals that include, project cost control-within cost and time, initiatives to protect the environment and innovative project funding initiatives. He appreciated the support from Ministries; Water and Environment, Finance, Planning and Economic, Uganda Development Bank among others.

Speaking on behalf of other contractors, Sogea Satom Country Director Jean-Luc Sion highlighted the recent project progress in Uganda adding that an example is the recently completed Katosi Water works, Upgrade of Ggaba water works and committed to deliver the Kagera Water Supply System on time and within cost 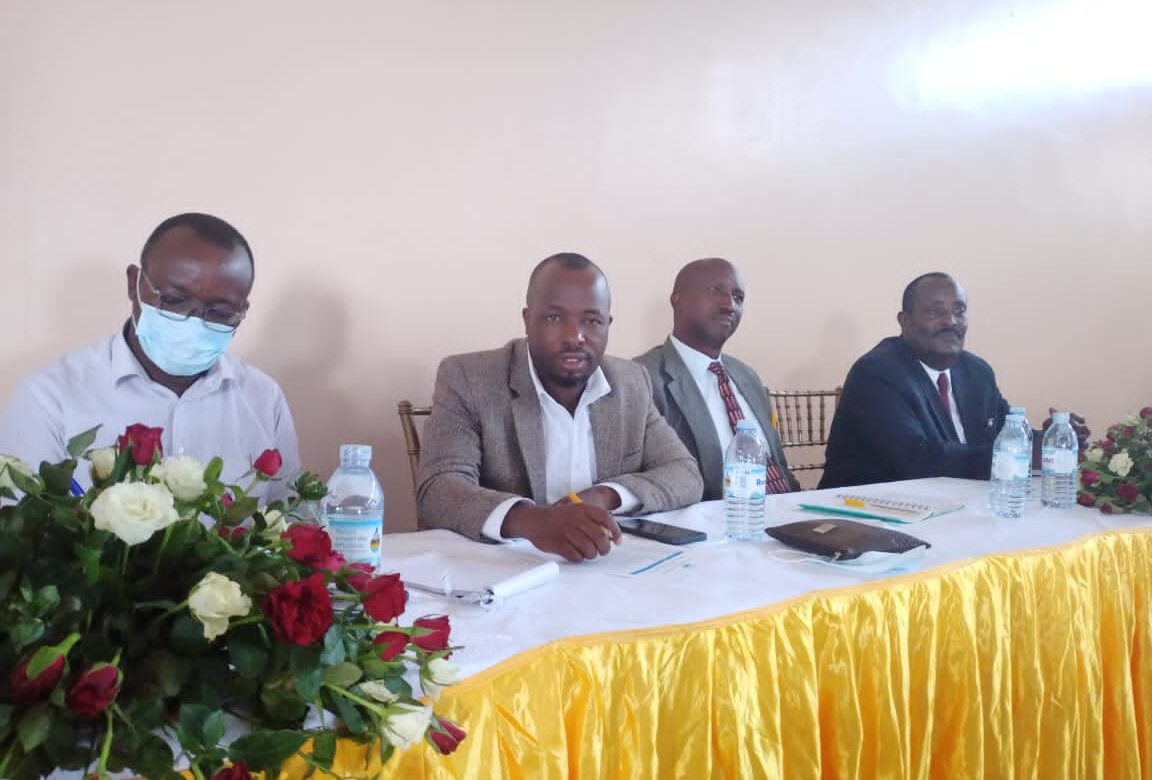 By Byamukama Libino Officials from National water and Sewerage Corporation yesterday launched their offices in Rukiga District. Addressing the members who…