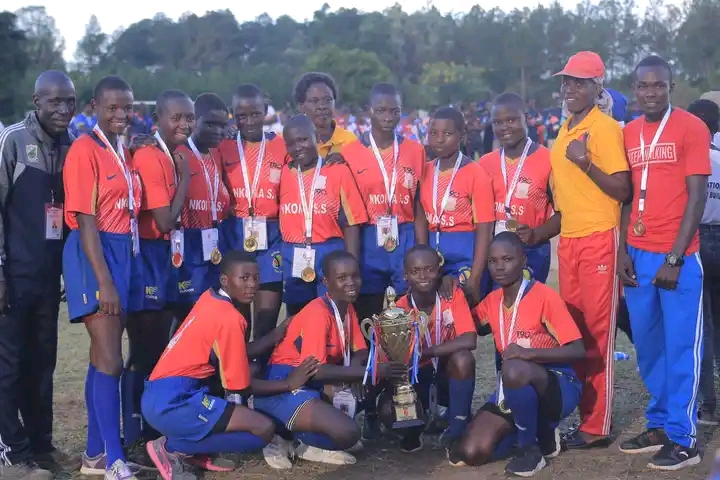 Gamisha Mariam the team captain for Nkoma SS commended Allah for enabling them win this National trophy. Adding that it was not easy for upcountry schools to win a trophy at National level.

“We thank our Headteacher Hajji Kawanguzi Abubakar for registering Rugby team for the first time and we win the trophy.” Gamisha said.

“I can’t forget our coach, games teachers my colleagues and Rugby Union thanks for that combined efforts towards our Successes.” she noted.

Mr. Katumba Hamisi the head coach Rugby Nkoma SS while addressing the media, thanked the Almighty Godp for making him the first Coach to win Rugby 7’s for Nationals.

Katumba said, they had some challenges like lack of equipments, hunger during the training but we fought teeth and nail to win the trophy, but according to suitation the Headteacher is very positive to support the rugby team.

“Nkoma SS has entered in history for winning a trophy at National level and being our first time to win, it has given us courage and we think we should start recruiting more players in the team.”Mr.Ndanda said.

Headmaster of Nkoma SS Hajji Kawanguzi Abubakar commonly known as Big picture said that, these trophies are not only for Central School.

Kawanguzi assured that, this is the beginning, as a School we have to invested in Sports to help the Students to benefit in their talents.

Nkoma SS is a big School not only in Uganda but also in Africa. “We have a plan to improve on all slots of Sports activities and next year in God’s will everything at least we shall be better.” He noted.

He said, we had financial crisis but we managed to take three teams at National even though the two teams did not perform well but next time better.

Speaker Among To Meet The Pope in Rome