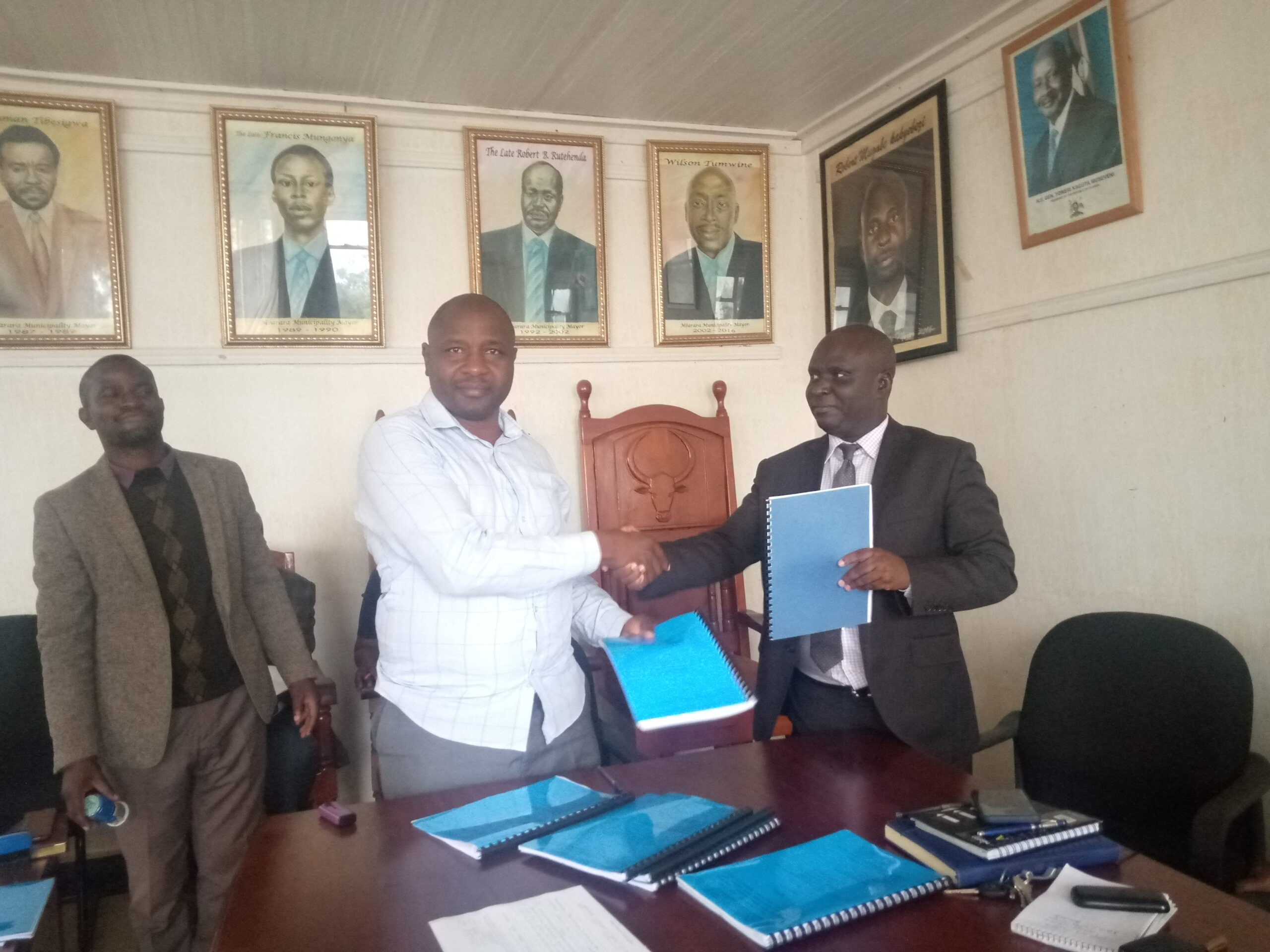 Mb’ra City Allocates Another 18b for 3.9km Road Construction

By Senior Reporter
Mbarara.
Mbarara City Officials have again signed another contract with CICO construction corporation at a tune of 18billion Ugandan shillings that is allocated for only 3.9km road construction.
The deal was signed last week between the Mbarara City Town Clerk Assy Abirebe Tumwesigire  and the Director CICO. This was done in presence of the City Mayor, the RCC, the Mbarara City Staff and other dignitaries.
Following the ongoing contract between Mbarara City and Maltiplex on the road construction of 2.86km at a tune of 23b, the same City has this time allocated another 18billions that will work on five roads which include Kyamugororani, Municipal Access, Lower Circular, Ruhara and Mosque road which total to 3.9km. All these roads will all be constructed by CICO of China Origin. The works shall include paving, drainage works, street lights and parking in some areas. This is a one year contract. The actual work will commence when the consultant signs.
On the same day, Mbarara City signed another contract at a cost of 1.83billions meant for beautification of Rwebikoona. This contract has been taken by Qued construction Company Ltd which is a local construction company in Mbarara. In this regard the works shall include paving in front of Rwebikoona market, there will be an automated machine for entrance that whoever is going to park will have to first pay through the machine. There will also be grassing of gazzeted area for parking of motor vehicles. This contract is given only six months to be finished. According to Hilary Kwarikunda the Director Qued Construction Company Ltd said that as soon as they get commencement order which they expect in one weeks time, they will go to the ground for actual works to start.
City Mayor Robert Kakyebezi cautioned the contractors to make sure that the money they pay them should be utilized to do the right work. He said that as Mbarara City they do not want to have issues with CICO or Qued over shadow work or delays. That they must present quality work that is value for money.
“People who are on ground are cursing over what maltiplex the company that took the contract of three roads which include Major Victor Bwana, Stanley and Galt roads of 2.86k at 23b is doing. I have gone to the offices of ministry of lands several times, several committees of Parliament always come and ask what is happening about this contract of Maltiplex, so I don’t want to have same issues with you CICO.  Actually I want you to come and put the other person of Maltiplex on pressure who started long time ago and he has failed to finish the work” , says Kakyebezi.
RCC Lt. Col. James Mwesigye asked Qued Contractor to save local contractors who have totally failed the works. He appealed to the contractors to avoid bribing if they want to perform well. ” When you follow the route of this man of maltiplex who is failing to do the work here,  rumours will say that he gave so much here and there, that he is now recovering the money he had bribed to some people and that’s why he cannot do the work well. Please do the better job and in time so that you don’t also give us headache”, says Mwesigye.