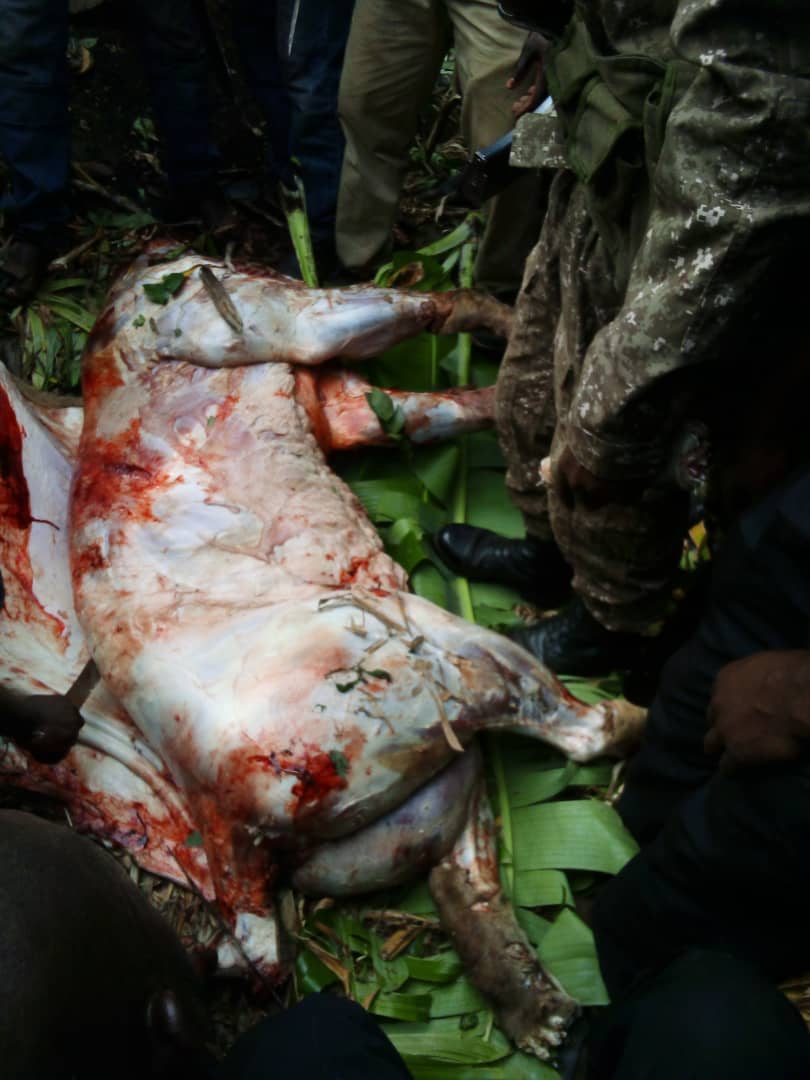 This is strange but true. Officials from Uganda Wildlife Authority (UWA) are investigating the circumstances under which locals from Rwabaragi village/parish, Mpeefu Sub-county, in Kagadi District skinned a lion and shared its meat. It all started on Thursday as a marauding lion from Kibale National Park raided Kobushera village and killed a number of livestock. The locals then informed the security and Uganda Wildlife Authority on top of hunting for it. Uganda Wildlife Authority staff at Muhoro satellite outpost got in touch with the DPC of the area and other police officers who also joined the hunt for the beast in Rwabaragi village/parish, Mpeefu Sub-county, Kagadi District where it was last seen about 30KM from Muhoro Town Council.

“The main objective of the hunt was to assess the situation with the view of capturing the lion and translocating it to a protected area,” a source from UWA said. “Upon reaching the area, the team found a crowd of communities who were already searching for the lion with all sorts of tools including machetes, spears and big sticks because it had already injured three people in the area,” he said.

The lion was already stressed and enraged by the presence and noise of a huge crowd that was following it with the intention of killing it. The communities were asked to give way so that UWA staff and police could handle the problem animal together with four community members, but instead more and more crowds gathered due to the noise and alarm that was being raised. The search team was shortly joined by UPDF soldiers commanded by Lt. Col James Lubega of First Division Kyeterekera UPDF Battalion in Kagadi who took over command of the operation.

As the search went on, one UPDF soldier Cpl Amodoi Moses sighted the lion and tried to shoot it but it jumped on him seriously injured him in the process. Another UPDF soldier nearby shot the lion dead to save his colleague. What shocked the police and the UWA staff was that immediately the lion was shot dead, communities that were in pursuit of it quickly skinned it and shared the meat.

UWA staff pleas to handle the carcass fell on deaf ears as they were overpowered by the crowd. They only managed to secure the skin and the head from the carcass which were taken to police for record purposes and further investigations.

“We regret the incident in which this stray male lion lost its life and extend our sympathies to the communities injured by the lion during the hunt and those who lost their domestic,” a statement from UWA read.