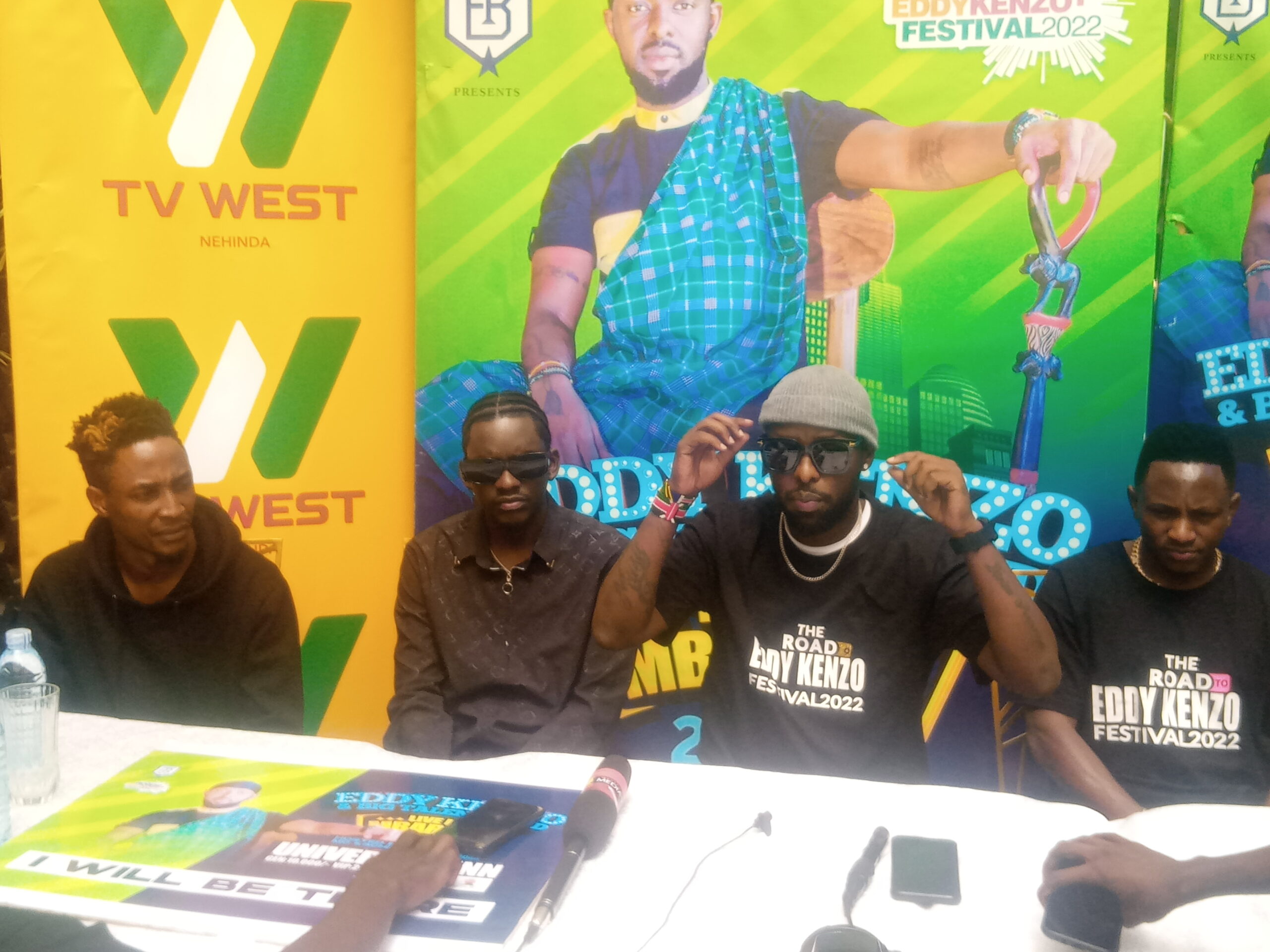 By Our Reporter
Mbarara – Ugandan music icon, Edirisa Musuuza also known as Eddie Kenzo has condemned the misconduct and  disrespect of regional upcoming artistes by Kampala event organisers and artistes.
Kenzo was speaking to journalists at a press conference ahead of the Road to Eddy Kenzo Festival 2022 Mbarara Concert that is happening on  Saturday 24th September at Mbarara University Inn. This was held at Discount Hotel in Mbarara City.
The Sitya Loss hit maker, Kenzo further said that he has given first priority to the western region artistes to perform on stage on the day without any interruption by anybody.
He assured the public that a lineup of western region artistes have been selected to perform their best on stage. He added that they have also selected a number of Kampala big names artists that will also turn up on stage to perform.
However, Kenzo has urged the events organizers to always value the performing artistes regardless of the level,  experience in the music industry or where an artist records his or her music from.
That all artistes invited on a certain event must be treated equally, insisting that they should be given opportunity and enough time to perform for their supporters and give them what they expect from them.
Kenzo also advised events organisers to always invite a few number of artistes on the event to avoid conflict of interests and collision.
He said that there should be a smooth arrangement by the event organizers to bring less number of artistes, who will perform to their people and give  enough time for their performances.
He based his reaction on the recent scenario when one of the western region performing artist Truth 256 was thrown off stage during his performance on Purple Tour.
Truth was called off stage after he had performed only two songs. Unidentified hooligans ordered Truth to get off the stage to give space for a Kampala artiste who was fighting to get on stage early because he wanted to perform first and rush back to Kampala.
It was such an  embarrassment to such a big western region artist. This caused chaos to an extent that fellow artist Ray G came on stage with a stick and condemned the way his colleague Truth was treated.
On that night, the Omusheshe hit maker was bitter and reacted against the misconduct saying that Kampala events organizers, artistes who call themselves big names must stop disrespecting regional artists. He said that the western artistes must be treated equally like how they treat Kampala artistes. This was during the Purple Party event that was held at Mbarara University Inn on 3rd September 2022.
Besides, Kenzo has not performed in Mbarara for about five years until this time when he decided to consider Mbarara and the western region for the Road to Eddy Kenzo festival 2022.
Kenzo pledged to perform for Mbarara People on Saturday at Mbarara University Inn. He will be a companied by a number of  big artistes from Kampala whom he did not mention but will be coming on stage as surprise acts.
Among the western artistes that have been considered to perform on the event include Truth 256, Megaton, Rasta Dog, Mat Henry, MC Kacheche, and many others.