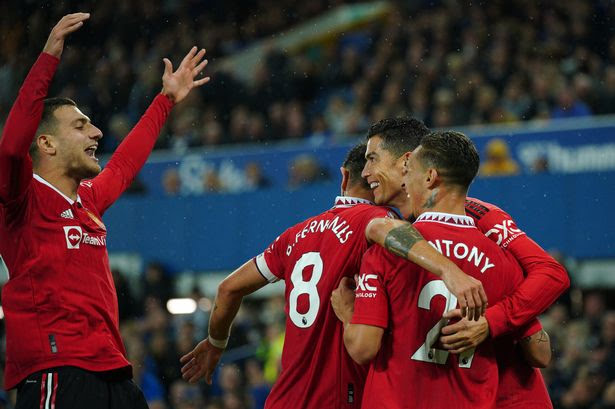 Manchester United came from behind to beat Everton 2-1 in the late Sunday evening kick-off in the Premier League.

Cristiano Ronaldo’s 700th club goal stole the headlines and the points for the Red Devils who were able to recover from the crushing derby defeat last weekend.

It was far from the start Erik ten Hag will have wanted though, as he watched Alex Iwobi bend a brilliant effort beyond David de Gea inside five minutes.

It didn’t take long for the response though as Antony made it three goals in his first three Premier League games with a composed finish 10 minutes later.

Anthony Martial provided the pinpoint assist for that equaliser but had to be withdrawn inside half an hour after picking up an injury in the warm-up.

His replacement made full advantage of his early introduction as Ronaldo latched onto Casemiro’s through ball and finished calmly past Jordan Pickford to bring up the 700th club goal of his glittering career.

Other than having to weather a stoppage-time Everton storm, Manchester United were able to hold onto the win in a fairly routine manner.

The three points move them into fifth within a point of the Champions League places while the Toffees have dropped into 12th.