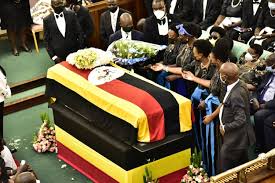 Government has finally revealed that former Speaker Jacob Oulanyah battled cancer and died of multi-organ failure. During a special sitting held at Parliament on Tuesday to pay tribute to the fallen Speaker, Health Minister Ruth Aceng said that Oulanyah has been battling cancer since 2019. She said this was after he discovered a swelling in his neck.

She said when the fallen speaker discovered the swelling, he sought medical treatment in Germany where the swelling was removed. “When the swelling was analysed, he was told that it was cancer,” she said. She said the fallen speaker continued seeking treatment from other hospitals adding that his management was however hampered by the Covid-19 lockdown and the busy schedule during elections which saw him fail to remain in hospital for treatment. She said the Speaker also sought treatment at Uganda Cancer Institute. She said in late January, the fallen speaker was admitted in Mulago hospital where he stayed for two weeks as the Government prepared him to travel outside to seek treatment. She said that Dr. Jackson Oryem, the executive Director of Uganda Cancer Institute led the 15 team of doctors who attended to the former Speaker and was among the team that travelled with him to Seattle. She said Oulanyah left for Seattle with two attendants Patricia Lakidi and Christine Aowr and one member on his security detail. Dr. Oryem also accompanied him and his duty was to ensure the hospital in the United States fixes him, stabilizes him and takes care of him during his stay in the hospital. She said the immediate cause of death was multiple organ failure. “The heart failed, the lung failed, the liver and kidney failed. The liver started failing when he was still here in Uganda as well as lungs that had started collecting fluids. The heart started failing while in Seattle as well as the kidney.” The Minister said that Oulanyah had lost his spleen while at Makerere following a riot and this organ is critical at manufacturing red blood cells, and his life was further threatened by intestinal bleeding because of lack of platelets, and his threat was further threatened by the multi-drug resistant due to bacterial infections he acquired due to prolonged stay in hospital.

Meanwhile, former Speaker Rebecca Kadaga took to Parliament at exactly 12:00 to pay tribute to Oulanyah whom she described as a friend. She said she got wind about Oulanyah’s ailing health in 2019 after his numerous trips abroad. Although Oulanyah refused to inform Kadaga about his particular ailment, all he did was inform her of his several trips abroad. Kadaga said Oulanyah’s several trips abroad worried her, prompting her to seek a meeting with President Museveni, saying that the several trips were Oulanyah’s way of trying to balance his duties as speaker as well as look after his health. Vice President, Jesca Alupo who led Government in paying tribute to former Speaker Oulanyah, described him as an exemplary and distinguished leader, who served Uganda with devotion and greatly contributed to strengthening adherence to rule of law, political tolerance, spirit of humanity and encouraged cohesion among different sheds of opinions.