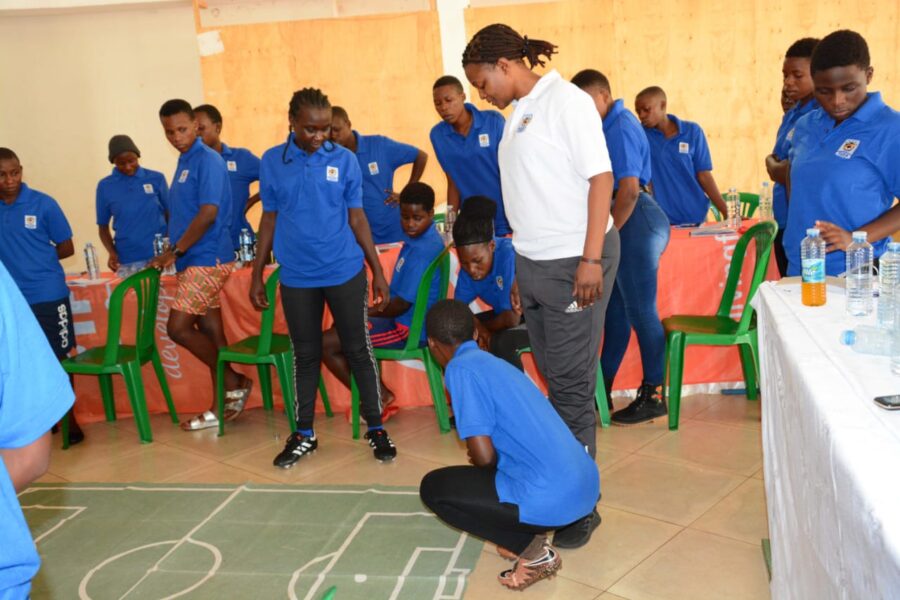 The FUFA Young Referees Project is back. FUFA has embarked on implementing key objectives of the women’s football strategy through the FUFA Hattrick passed by the General Assembly in Mbale last year by organizing a course for young female referees at the FUFA Technical Centre, Njeru.

It is the second project after the inaugural course in 2018 that produced young referees who later graduated to officiate in the FUFA Juniors League.

The five day course targeting referees between the age group of 15-20 years is supported by the world’s soccer governing body FIFA. The course-the first of its kind in Uganda for young female referees, has attracted 38 participants and it is in line with the FUFA Women’s Football Strategy of increasing the number of women in women’s football and the goal of increasing the number of women referees in the game.

The participants are from the 8 FUFA Regions; Northern, North East, Eastern, Buganda, Kampala, Western, West Nile and Kitara. This course is the first of its kind in this category. The participants are also enrolling for refereeing for the first time. Each region submitted 5 names for the course.

‘We shall continue creating room for the younger generation in refereeing and increase number of women in the administration sector. We thank FIFA for this great opportunity to develop women’s football in Uganda from the grassroots by empowering young girls. The project gives us the chance to full fill our Vision of becoming the number one football nation in Africa on and off the pitch and our Mission of protecting football for all’ said Magola.

The course is part of activities lined up through the FIFA-FUFA Women Development Project launched last Saturday at the Uganda Christian University in Mukono.

The FUFA Executive Secretary of the Football Development Unit Ronnie Kalema highlights the federation’s desire to help in the growth of refereeing in the country.

‘FUFA has always responded by introducing the Young Referees Project II which aims to support the youth-both girls and boys who are identified and developed at the early stages of their career. Such programmes give the federation maximum guarantee of 100% future for football. We have seen that such a programme is proven to the technical people since 80% of the first group (enrolled in 201) is officiating at the top level in our organised Competitions,’ noted Kalema.

Nambasa Jackie Mbekeka is a senior six student at Uganda Martyrs High School Lubaga. She is delighted with the opportunity. I want to learn alot in refereeing. I will now channel the energies and passion on developing my talent. I am also a football player but i will concentrate on refereeing for now.

Key objectives of refereeing in FUFA’s strategic plan ‘The Future 2021-2025’ under the theme Consolidate and Takeoff.

Set minimum requirements and undertake to recruit competent persons at the right age as referees and assistant referees for all forms of football
Conduct training courses for quality assurance on objectives of Integrity, Fitness and Performance
Acquire performance aids and technology
Improve on remuneration and welfare inclusive of the payment schedules
Provide equipment and attire for international and National referees
Competent Instructors, Match Assessors and Match Commissioners

The lead instructor of the course is Harriet Natabi (technical) while Rahma Kizito (Physical fitness) are handling the youngsters who enrolled for refereeing for the first time.