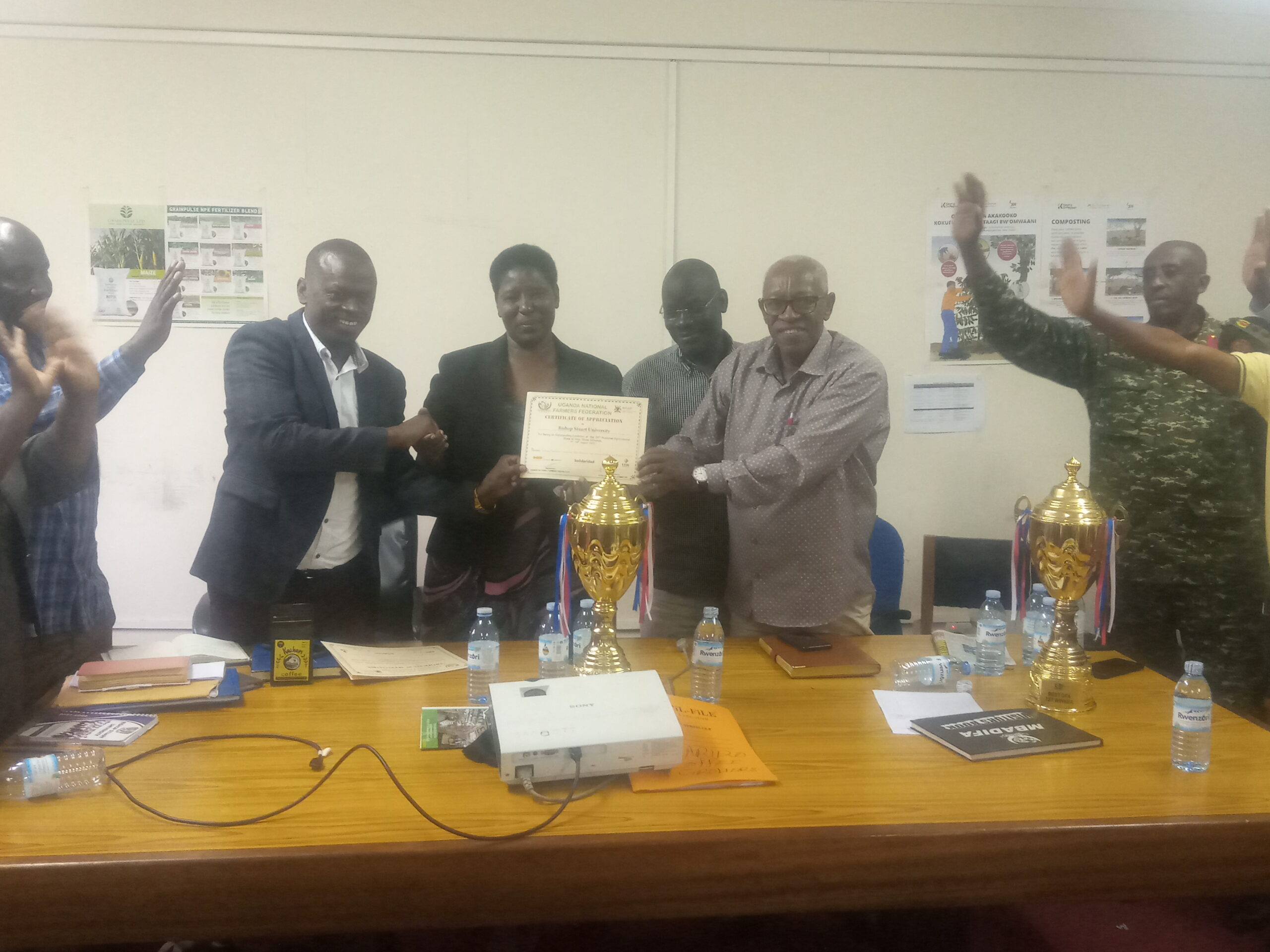 Several different categories of exhibitors participated in showcasing their products and innovations. At the end of exhibition, Mbarara District under their Farmers Umbrella MBADIFA emerged the winner of these completions.

This was under this years theme as Fostering Resilient Commercial Agriculture. Participants from Mbarara District were able to interpreted the theme that enabled them to take the trophy.

After this show, Farmers have realized that the support from government in organizing the National Agriculture Trade Shows is still lacking. That Government especially ministry of Agriculture and ministry of Trade and Cooperatives must come in and back up the Uganda National Farmers Federations to always arrange mega agriculture trade shows in a way to help farmers have better platform in exhibiting their innovations that will promote farming and agro-business in Uganda.

Alex Atuhaire, the Coordinator MBADIFA said that there is no way how agro-Business will grow to reach the climax when farmers are not innovated. That it’s one way for farmers to have innovation knowledge and skills by copying from what others do. That this will happen when farmers access such national agriculture trade shows that are fully supported by the government.

That there are limited resources to the extent that some of the farmers don’t always attend these agriculture shows because some find it expensive to participate, some don’t even know the importance of marketing and this is one of the core values of these shows. ” If government can look into its budget and support farmers to participate in these agriculture trade shows and to learn more innovations and market their agricultural product, I think agro-business in Uganda will grow. Today one of the challenges in Agro-businesses in Uganda is that our farmers and innovators have not gone to full scale marketing, most of them have not appreciated the importance of marketing and agriculture shows, you don’t only learn from them but you also promote what you have. Therefore we and the government we need to intensity at sensitizing our people and support them grow their businesses” said Atuhaire.

” Government has tried to support us but its not enough at all, ministry of Agriculture should be able to inject in more money to support farmers to showcase different value chains. I think this will benefit our local farmers and other innovators to generate more income and also to have values in our products for market. We appeal to the government to put more support to our federation. You see supporting the federation to organize at Jinja show is not enough itself if the farmer let say from Bundibugyo does not come to showcase, meaning the ministry of Agriculture should step up its funding to support the farmers who are able to come and exhibit by transporting them with their exhibits because farmers have really innovated, they have many things which they would love to showcase, some want also to learn from others so there should be an opportunity for farmers to go to Jinja for the agriculture trade shows. This is also important for the government”, he added.

Among the categories of exhibitors that participated in the recent Jinja Show include 20 enterprises and 15 training institutions but the active ones were Bishop Stuart University and Rwentanga training institute.

All these were from Mbarara District, Mbarara City, Ntungamo District and Rwampara District under the association of MBADIFA. MBADIFA is an association based in Mbarara that is aiming at helping and guiding farmers about farming and the entire agriculture. Other enterprises under MBADIFA that took part in the agriculture show in Jinja include Kashari coffee, Red Star wine, Abrel Ltd and many others.