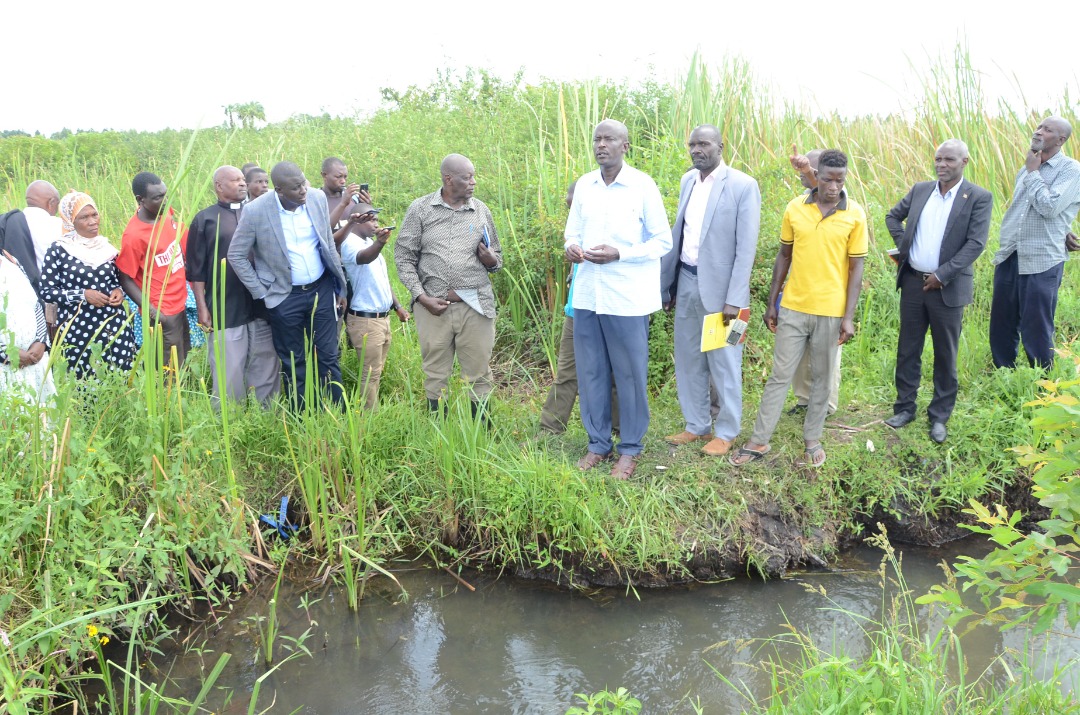 By Our Reporter
WallnetNews/Mbarara- Mbarara City RCC Col. James Mwesigye has accused the Mbarara Environment Police Officer for conniving with some rich people who have mismanaged the wetlands in Mbarara.
The RCC Mwesigye has also accused  the same Officer, the Mbarara City Natural Resource Officer who dodged his invitations about the operations against the people who have encroached the wetlands.
On Wednesday this week, the team from the office of Mbarara City RCC and some other few Politicians held an operation at Rucece wetlands in Mbarara City South Division where they found a number of individuals have massively encroached on these wetlands. People have destroyed almost a half of this wetlands for their gardens. Locals have argued that the environment officers normally focus on chasing out the poor people out of the wetlands leaving the other rich ones to stay running their activities normally  within the same wetlands.
According to Mwesigye, he alleged that he got information that the Environment Police officer got 1.5m recently from some people who wanted to keep encroaching these wetlands.  It has been discovered that a number of tycoons including Ministers, and families of rich people from areas of Rucece, Katukuru and Kibaya stretch wetlands have all encroached on these said wetlands and no any authority has come up against them.
However the Mbarara RCC has ordered his deputy in charge of Mbarara City South Division to implement the policy to ensure that all trees planted in the wetlands be cutt down. That all gardens that contain food crops, the owners be given an opportunity only to harvest their crops then after no one should be allowed to carry any other activity on that land as long as it is within the wetland lane.  Mwesigye said that no one is above the law whether one is rich or poor, all have to leave the wetlands.
About 150 hectares of the wetlands in this area have been encroached. And in this regard over  people are going to be affected.
According to Leo Tumuhairwe Kotazarirwe, the  LC1 Chairman Rucece cell said that they have complained over the time about the people who have encroached on the wetlands in Rucece but no any authority had put it in action. That they want all the people be chased out of these wetlands. He asked the RCC to take a serious  action against the tycoons who think they are untouchables.