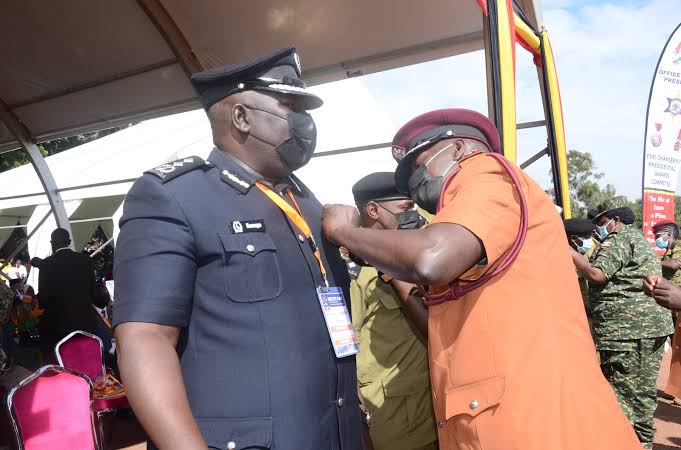 Uganda today marked heroes day celebrations at Kololo celemonial grounds in which the guest of honor was the prime minister Robinah Nebbanja.
It was however jubilations within the police institution as 17 of its officers were awarded with heroes medals. Among them was its spokesperson ASP Fred Enanga that was honored by this great hero medal.

Fred Enanga was awarded with heroes medal in the category of Golden jubilee, which is only given to government workers that have performed beyond the expectation.

Fred Enanga who was all in jovial mood informed wallnetnews reporter that today’s honours have instead encouraged him to work even harder. “it is also going to help me empower and inspire more officers so that they can also come and get motivated” Enanga said.

While receiving the award, it was noted in the statement that Enanga exhibited extra ordinary acts of determination that have helped the police institution to succeed. “As the current Uganda police force publicist, his acts of courage, patience, and determination and compassion have helped the create a tangible positive impact on the Uganda police force for a continued success.” the statement read.

Fred Enanga has however served in various capacities within the police institution. Since he joined the Uganda police in 2001 as a cadet officer at the rank of an Assistant Superitendant of Police (ASP). He headed the economic crimes department and worked as a CID Commander KMP, commander CID administration and training, and commander land protection unit.

This year’s heroes’ day was held under the theme ” commemorating our Heroes and heroines. An opportunity to consolidate our efforts in securing Uganda”

Locals Hail MP Ndamira Over Her Efforts in…