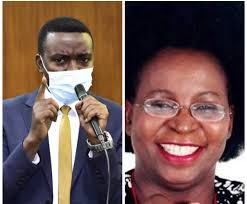 WallnetNews/Parliament— Embattled minister for science and innovation Dr. Monica Musenero yesterday 11th May  interfaced with adhoc committee on the floor of parliament after a report was tabled recommending for disbandment and suspension of preside, a company under which minister Musenero recieved close to 30billion shillings to research for the deadly Covid 19 vaccine as covid had ravaged Uganda and the entire world.

It all started in November 2021 last year when a fearless legislator for Ntungamo Municipality Yona Musinguzi petitioned parliament for the alleged misappropriation of tax payers money that had been allocated for research and manufacture of the covid 19 vaccine during the 2nd wave of the deadly pandemic.

Parliament later constituted an adhoc committee and it was chaired by Ibanda North legislator Xavier Kyoma.

The long awaited report by the adhoc chairman was however tabled before the plenary session of the 11th parliament presided over by the Deputy speaker Hon. Thomas Tayebwa in which it faulted Dr. Monica Musenero and preside company which was mandated to manufacture the covid 19 vaccine for wastage of public funds.

The report further recommended for disbandment of and suspension of preside Innitiative funding with immediate effect.

“the committee further observed that the category of vaccine had not yet completed clinical trials and consequently not approved by NDA” Chairperson further added.

However, Dr. Monica Musenero who was present during the plenary session dismissed the committee findings in the report as baseless.

“and once the new structure was approved by public service, preside was merged. So there is no chairperson of preside” Dr. Monica Musenero explained.

Legislator Yona Musinguzi has now embarked on the process of censuring the embattled minister and has already collected signatures from fellow legislators for Censure.