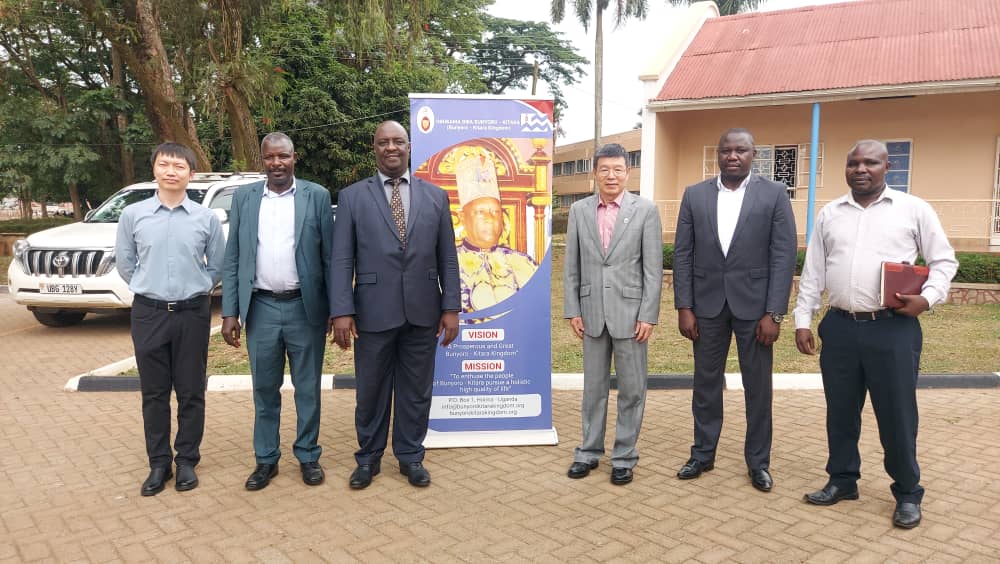 The President of CNOOC Uganda Mr Chen Zhuobiao has paid a courtesy call on Bunyoro Kitara-Kingdom offices this evening.
He was hosted by the Prime Minister of Bunyoro-Kitara Kingdom Owek. Andrew Byakutaga Ateenyi.
The meeting discussed areas of partnership between BKK and CNOOC Uganda.
The President of CNOOC Uganda expressed readiness to support Kingdom projects that will improve on the welfare of the people and interventions that will make the development of the Kingfisher development area a success.
The BKK Premier appreciated CNOOC for choosing to invest in Bunyoro and the support the company has extended to Kabumba’s subjects.
The Premier asked them to enhance local content through giving more opportunities to Kabumba’s subjects in terms of trainings, jobs and business opportunities.
CNOOC has awarded some contracts and more business opportunities are expected to unfold soon.
The meeting resolved that BKK submits project proposals that require support by CNOOC. The development of the proposals has commenced.
The meeting was also attended by the BKK Oil and Gas manager Mr. Byaruhanga Robert and Ms. Sucy Amanyire, an Administrative Assistant in the office of the Prime Minister.
The CNOOC President was accompanied by Mr Tian Yu, the CNOOC Corporate Affairs Adviser, Gao Guangcai, the CNOOC Engineering Manager, Mr. Zakalia Lubega, the CNOOC Uganda’s head of department, Corporate Affairs and Mr. Kagoro David, the CNOOC Uganda Community Relations Manager.
CNOOC has supported various projects in Bunyoro. The company has given livelihood support projects for people affected by Kingfisher oil developments, skilled the youth through vocational courses, given awards to best candidates at primary seven, O and A levels as well as the CNOOC-Bunyoro Amasaza Cup among others.
CNOOC is one of the licensed oil companies that signed a Finally Investment Decision (FID) with the Ugandan government to kick start commercial oil production.
The Kingfisher Development Area (KFDA) covers the Kingfisher field located in Kikuube District and licensee Area 2 South the in Kaiso-Tonya areas in Hoima District.
The project operated by CNOOC Uganda Ltd and includes the following facilities:
i) Development of a Central Processing Facility (CPF) with a capacity of 40,000 barrels of oil per day.
ii) Thirty one (31) wells (11 injectors and 20 producers) to be drilled on four (4) well pads.
iii) Nineteen (19) kilometres of flow-lines to connect the fields to the CPF.
iv) A forty-six (46) kilometer 12 inch feeder pipeline from the CPF in Buhuka to the export hub and Refinery in Kabaale, Hoima District.
V) A Lake Water Abstraction station.
Vi) Supporting infrastructure such as temporary and permanent camps, a materials yard, a jetty and several access roads, among others.