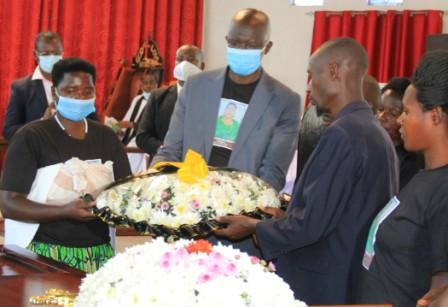 Christians in the district of Kabale have been urged to Shun Earthly pleasures and turn closer to God. This was revealed yesterday at St. Philips Bugongi Estates church of Uganda at the sendoff of a renown Kabale District Business woman Mrs. Tumuranze Venice Thereza. 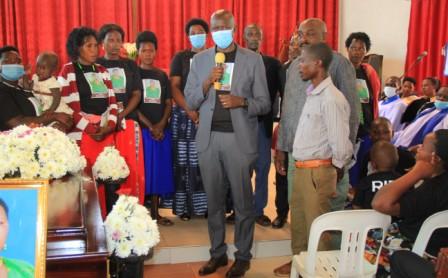 Thereza was a business woman who came to Bungonji Kabale in 1997 and started working with ICRAF I 2000 up to the time of her death. She had also established a nursery Garden in Kigezi in Kigongi. Born on 17th September 1973, Thereza, succumbed to cancer of the utlus on Sunday, 5th June 2022.

Thereza is survived by four children and four grandchildren and has been a cousin sister to the Kabale LC5 boss Nelson Nshangabasheija.

During his sermon, Rev. Micheal Asiimwe, who led the mass described Thereza as a person who had strong faith in God despite the situation she was passing through.

Asiimwe showed concern on how the public hesitate looking after the patients when they are still alive and rush for making burial arrangements. He applauded the role played by the Kabale Lc5 who paid attention to her life and all the Medical bills. He Urged Christians to believe in Christ if they are to prepare themselves for the kingdom of God. He however showed concern on how earthly things have made Christians forget Jesus Christ.

Dr. Kamara added that the majority of Uganda’s are dying of Cancer, Hypertension, Diabetes and heart attack. He urged the Donors and the public to start raising their voices against None Communicable diseases and once the donors embrace it, life starts getting saved. “We are going to die if no serious action is taken,” Kamara added. The legislator tasked the government to invest much in none communicable diseases which have become a threat to Ugandans.

Kabale District Lc5 Chairperson Nelson Nshangabasheija showed concern about how people love the dead more than those who are still alive. He thanked whoever has contributed to save her cousin sister and urged the public to assist the patients when they are still alive irrespective of sex and Nationality.

Nshangabasheija, said that it’s unfortunate that people have billions of money sitting in their bank account but they can’t even buy a bottle of soda for the sick patients. “The late has died not because she lacked care but on God’s Decision.” he added. He pledged to look after the orphans.

DP Decry Over Limited Resources Ahead of Women…