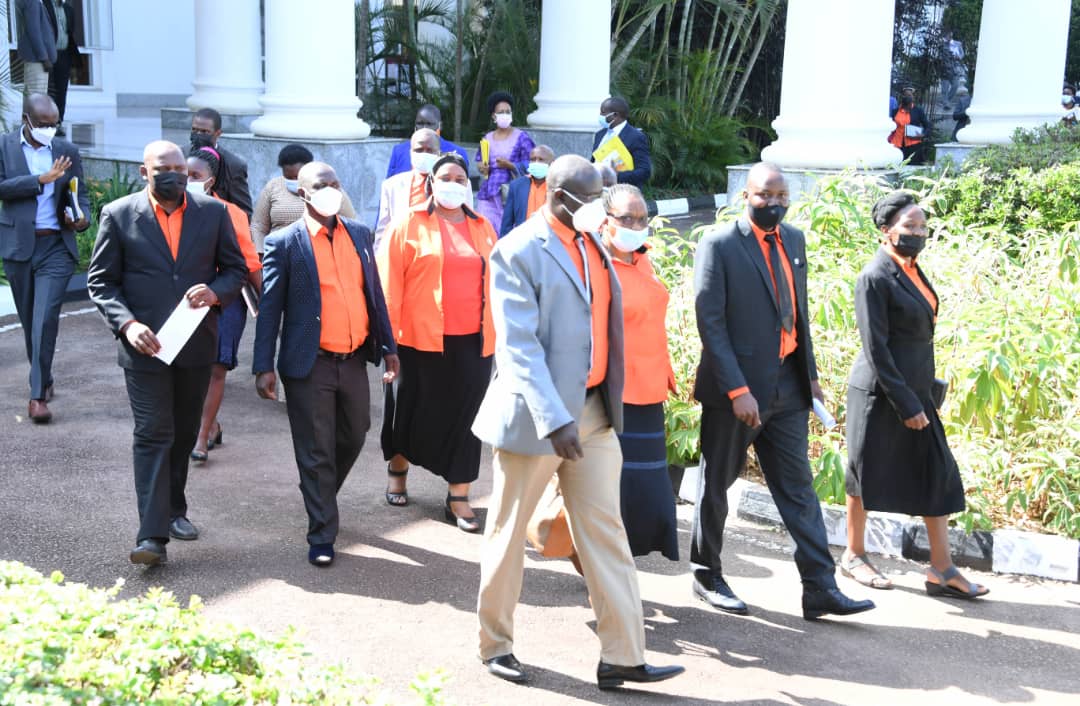 President Yoweri Museveni yesterday called on teachers in the country to call off their industrial action, promising that Government is committed to give civil servants good remuneration.

“In principle, we shall pay everybody well but as of now, let us concentrate on one aspect. Don’t tell me about this industrial action. Go and work! Our aim is to pay civil servants well,” he said.

The President made the remarks yesterday Saturday at a meeting with members of Uganda National Teachers Union (UNATU) at State House, Entebbe.
He was flanked by the First Lady and Minister of Education and Sports, Hon. Janet Museveni.

President Museveni told members of UNATU that Government is committed to raising the pay of all civil servants but priority should go to science teachers as they are very critical in the development and transformation of the economy of Uganda.
The President who was commenting on the issues raised by teachers in a memo read by the Secretary General of UNATU, Mr. Filbert Baguma, assured arts teachers that they are not being discriminated against as they are equally important but focus should first be on science teachers who are now much needed for the growth and the expansion of the economy.

“We are not discriminating. Your line of discrimination is a wrong one,” he said.
The President explained that three quarters of the economy involves science like in Agriculture, ICT and services that are shared in the medical and entertainment industry, among others.

He appealed to teachers not to divert and disrupt Government’s plans of strengthening the economy through the development of infrastructure but called on them to continue discussions with the relevant ministries and stake holders in order to strike a win-win situation as regards the pay rise of all teachers.
“I don’t accept the idea of scattering resources. Negotiate new targets, not deadlines! Your disruptive plans are not acceptable. It is not correct. We shall not stop from implementing our plans,” he vowed.

He reassured teachers that the pay rise is being done according to priority focusing first on science teachers and later arts teachers emoluments will also be augmented.
The President cited IT engineers who have to monitor activities in the phone sector and levy revenue for Government’s coffers.

The President dismissed as incorrect the argument raised in school staff rooms that arts teachers are comedians and of no value, describing that argument as an ignorant one.

On her part, Hon. Janet Museveni told the UNATU leadership that as a family they should sit down and solve any challenge amicably.

Government has been playing its role in the pay rise since 2016 and is continuing to be faithful in that area to date. She added that teachers are disciples supposed to teach patriotism.
“Leaders are supposed to be light on the hill,” she counseled.

“This year, salary enhancement for teachers has been done. Government decided to start with scientists, then later come back for the rest of the civil servants. Teachers are supposed to be patriotic; to shepherd little children. They are supposed to nurture them into upright citizens and teachers must be the light on the hill.”Hon. Muruli Mukasa advised