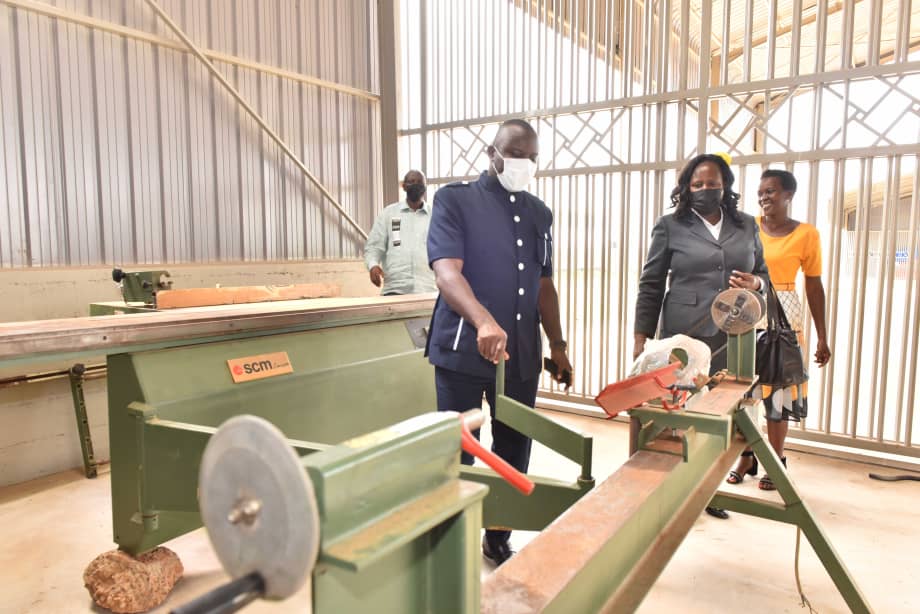 The Director of Industrial Hubs and Presidential Projects in State House, Eng. Raymond Kamugisha, has warned Bunyoro and West Nile leaders against corruption when enrolling learners for the Zonal Industrial Hubs under the Presidential Initiative on Skilling Boys and Girls.

While meeting leaders from Bunyoro sub-region at the Industrial Hub premises in Kimengo Sub-County, Masindi Municipality in Masindi district on 30th March, Eng. Kamugisha urged leaders to be transparent and non- sectarian when selecting beneficiaries to receive skilling.

Eng. Kamugisha, who represented the State House Comptroller, Madam Jane Barekye, was in the area to sensitize leaders on how best to kick start the skilling project. He urged leaders from the sub-region to select a committee composed of upright members who will not solicit  bribes from the beneficiaries during the admission exercise.

He thanked the leadership of Kimengo Sub-County for hosting the hub adding that the facility will accommodate 300 residential learners at a time on a cycle of 2 semesters in a year for a period of 6 months each.

He said the training, accommodation and meals will be provided free to beneficiaries.

Eng. Kamugisha disclosed that the skills that will be available for the youth of 18 to 35 years of age at the hub include carpentry, tailoring weaving and knitting confectionery and baking, shoe making, welding, stone cutting and block making.

“In future other courses will be incorporated like hair-dressing electrical wiring and others,” he said.

He said the hub will have common user machines, value addition cottages and a component of 4- acre model for demonstration purposes.

He added that another component will be training in mindset change as well as physical education to make the youths become change agents once they return to their communities.

He commended the leadership of Bunyoro for being very well organized by attending the meeting at short notice in large numbers. He also thanked the Ministry of Local Government for a job well done in mobilizing all stake holders to realize that what was once a vision is now a reality.

The Private Secretary in-charge of Political Affairs and Youth at State House, Mr. Longa Godfrey, thanked all participants at the meeting for turning out in large numbers and also commended them for supporting President Museveni and all NRM candidates in the recent elections.

“Bunyoro performed very well and that is why we are here today,” he said.

He also congratulated the newly appointed RDCs and RCCs whom he encouraged to carry out their duties diligently and always endeavor to identify challenges faced by the population and provide solutions to those problems.

“Do what you are supposed to do for the good of our people,” he counseled.

The representative of the Permanent Secretary, Ministry of Local Government, Mr. Julius Muhairwe, encouraged leaders to involve the private sector in whatever economic activities they are planning or carrying out in their areas of jurisdiction.

“We are not looking at Masindi district as an administrative unit-but as an economic unit,” he observed.

He further urged them to lead by example not to preach wealth creation when they themselves are poor.

“We should cut this comedy of propagating wealth creation when you are poor. You must be rich to propagate wealth creation. We as leaders must change our mind sets,” he advised the Bunyoro leaders.

The Masindi LC 5 Chairperson, Mr. Byaruhanga Cosmas, gave a brief history on how the 100-acre land was acquired and where the hub now sits on a 20-acre piece of land. He thanked President Museveni for the initiative of addressing the challenge faced by mostly the youths adding that the courses offered at the hub are all marketable in society.

He, therefore, urged all leaders to maximise the purpose of the project for the benefit of the population.

The NRM Chairperson Hoima district, Princess Kabakumba Matsiko, urged leaders in the region to maximally utilise the hub by sending in the youths who are committed and are ready to be useful to their community after their graduation.

“Let’s utilise this facility. If we utilise it properly, we shall change our society,” she said.

While in West Nile, Eng. Kamugisha reiterated his warning to leaders where the Industrial hubs are based in the country that there will be zero tolerance to any form of corruption during the selection exercise of the beneficiaries of the skilling.

“This program was designed for the poor, so no corruption. The plan is for the youths who have not been fortunate enough to get proper education to acquire skills that can make them also to survive decently,” he stressed.

He sounded the warning while addressing leaders from the districts of Adjumani, Moyo and Obongi at Madi Industrial Zonal Hub in Olia Village, Adjumani West County, Pakele Sub-County in Adjumani district on Thursday, March 31, 2022.

The West Nile hub is based in Zombo district. The meeting was convened to sensitize the  leaders on what is required to successfully operationalise the Industrial skilling units.

The leaders were taken on a guided tour around of the facility by the manager of the Industrial Hub, Mr. Robert Aluma Mamawi. The workshops toured included that for knitting and shoe making, maize milling, coffee processing, bakery, stone cutting, block making and laying.

Other structures at the Hub include a dormitory for girls and a separate one for boys as well as the Administration block.

“When it comes to development lets be together. Let us unite for development,’’ Kamugisha told the leaders.

He encouraged them to do research and identify areas that can successfully adopt and apply the 4-acre model to enable the people in the community to see with their own eyes what is being done.

The representative of the PS Ministry of Local Government, Mr. Muhairwe, urged the leaders to change their attitude to run their areas based on economic development interests. He added that with the advent of Parish Development Model (PDM), four basic pillars are now in place and they include production, processing, storage and marketing.

“Look at your production and see what best you can produce in your area like fruits in Teso,” he observed.

On his part, Mr. Longa expressed gratitude seeing leaders flock in for the meeting at short notice and commended them for supporting President Museveni and NRM. He attributed the resounding victory of NRM to programs that have been implemented by the NRM government citing, among others,  infrastructure projects.

The Secretary for Production, Adjumani District, Ms. Ondoa Korina who represented the District Chairperson, Mr. Ben Anyama, reported that the district is stable, calm and at peace.

She expressed appreciation to President Museveni and the Government for the Industrial hub that will provide the youths with a huge opportunity to shape up their lives, describing the Hub as a big blessing to the people of the sub-region. She called on all the leaders to mobilise the youths to take advantage of the blessing.

“I really appreciate the government under the leadership of President Museveni for giving us the Industrial Hub to skill the youths. This is a very big blessing to us as a sub-region,” she noted.

The Bunyoro and West Nile Hubs are among the 20 constructed countrywide to mitigate the challenge of unemployment especially among the youths who, after the training, are poised to become job makers as opposed to  job seekers. The Hubs are a brainchild of President Museveni as part of his agenda to get all Ugandans into the money economy.

WE SHALL MEET IN COURT – KATUMBA WAMALA…