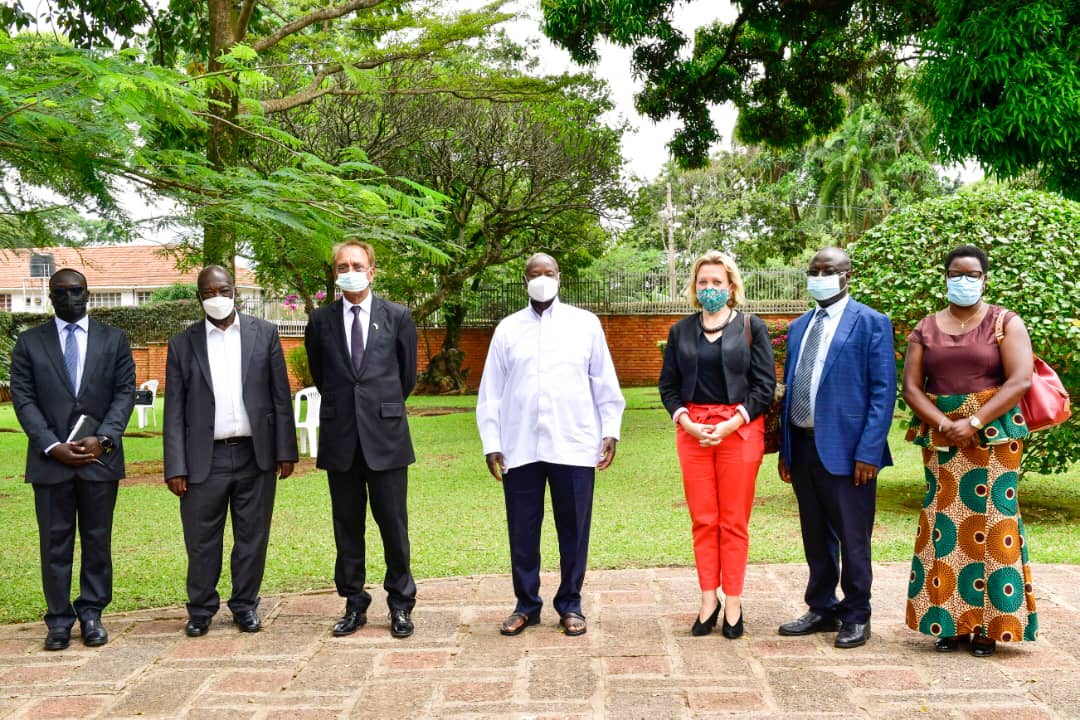 President Yoweri Kaguta Museveni on Friday 15th April received a message of condolence from the British Prime Minister Boris Johnson upon the death of Speaker Jacob Oulanyah. Rt. Hon. Oulanyah died in USA on March 20 and was buried last Friday at Lalogi in Omoro district.

Premier Johnson’s message was delivered by Lord Dolar Popat who called on the President at State House, Nakasero, this afternoon.

“Greetings from Prime Minister Boris Johnson. He sent you, all Ugandans and the family condolences for losing Speaker Jacob Oulanyah,” Lord Popat said.

In the meeting that was also attended by the British High Commissioner to Uganda, H.E Kate Airey,

Lord Popat is a Conservative Peer at the House of Lords and has been the UK Trade Envoy for Uganda and Rwanda since 2016.

Speaking to his guests, President Museveni said that Uganda and the UK should be cooperating more and doing more business because of their social and cultural links. He added that both countries share many aspirations than no other.

“The commonwealth is the only international organization where we don’t speak through translators. So, your coming back is a good thing. We should even work more,” President Museveni said.

He said that this was caused by the lazy public service they inherited.

“During Amin’s time, we found the public service broken down. These people are totally parasites. They are just waiting for salary. What has helped Uganda to recover has been the Army and Private sector in spite of the obstacles caused by public service. They have helped the economy recover, ” the President said.

“The airline people are well paid. Why can’t they finish the issue of direct flights? They are the enemy of the country.”

The President said Uganda is focusing on improving the standards and processing of agricultural products that are acceptable to the international market.

“Standards and processing of agricultural products is crucial, like poultry products, milk, sugar, etc. They are very cheap because of low cost of production,” he said.

The President encouraged his guests to attract more investors from UK to come and invest in Uganda because Uganda is rich in minerals.

“Get me people to link up with our people here to start producing cobalt batteries because we have a lot of phosphate here instead of exporting law materials”.

Lord Popat revealed that they have a grand plan of taking Ugandan qualified nurses to work in the UK. He added that they chose Uganda because they are English speakers and they have so much in common.

“Health has become a very important issue. We want to start taking Ugandan nurses to the UK for work. Ugandans are English speakers which is an advantage to them,” he said.

He said negotiations are already underway with the Ministry of Health Permanent Secretary, Dr. Diana Atwine.

“Dr. Diana is going to collect their CVs. We want to train and up-skill the Ugandan nurses in the UK,” he revealed.

Uganda, he said, is a land linked country and so good for investment.

On the side of agriculture, Lord Popat said “Uganda’s culture is agriculture. We want to support this particular area of agriculture because the demand for agricultural products is high in the UK.”

He asked the Uganda Government to work on the issue of starting direct flights to UK by Uganda Airlines to promote tourism and investments.

“If Uganda is willing, we are ready to send our aviation people here to help CAA so that we can have direct flights to the UK”.

He wondered why Uganda is so rich underground, but so poor on the surface.

“Let us sort out this. I will bring you a delegation for mineral investors,” he added.

On her part, H.E Kate Airey emphasised the need to have direct flights to the UK to promote tourism and links with the UK.

The meeting was attended by the Minister of Trade, Industry and Cooperatives, Hon. Mwebesa Francis and Amb. Beatrice Pachunega, among others.

LOCALS TIPPED ON SECURITY OF THEIR CHILDREN AHEAD…