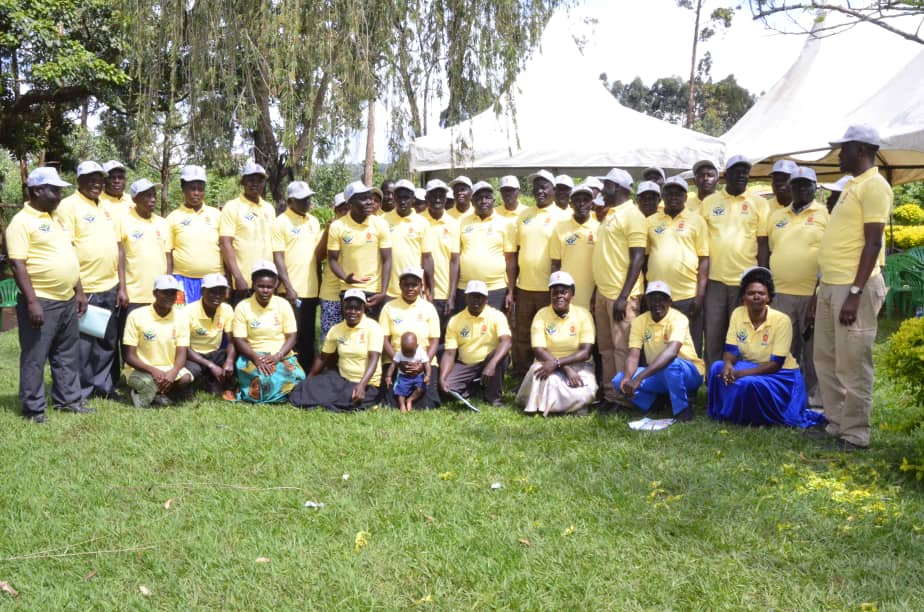 WallnetNews/Bunyoro— Over 50 BKK Chiefs will today conclude their training on how to implement the Desired Model Household in their respective areas.

The training is underway at the farm of Owek. Kisembo Good year, an intensive commercial farmer in Kyenzige, Buyaga East County in Kagadi District who is also a Member of Bunyoro Kitara Kingdom Parliament.

Cumulatively, over 180 Chiefs from all over Bunyoro have undergone the training which among others, covered mindset change, a desired model household, imported dangers in a home and practical sessions.

The project will support BKK Chiefs to be role models, mobilisers and implementers of the initiative.

The project will be opened up to benefit the entire public.

The model envisions a peaceful, prosperous, stable, social economically self- sustaining home that has conducive shelter, shades, a source of water, food for consumption and sale as well as a clean environment.

Under the project, the Kingdom is using indigenous knowledge, skills and items which we blend with modern science.

Forexample, the use of traditional herbs in treating indigenous chicken.

Promoting of planting of indigenous seeds which many homes have abandoned in favor of genetically modified foods.

A model household is one of the projects which His Royal Highness Dr. Solomon Gafabusa Iguru I, the Omukama of Bunyoro-Kitara tasked the administration to implement in line with his desire to see a prosperous and great BKK.

According to the BKK Prime Minister Owek. Andrew Byakutaga Ateenyi, if well embraced, the desired household model will transform families and the entire Kingdom in general.

He says the King wants his people to have homes that are productive, peaceful and economically stable so that they meet their needs and undertake development projects.

The Kingdom intends to work with its partners to support families with trainings and inputs that will enable them achieve the project objectives.