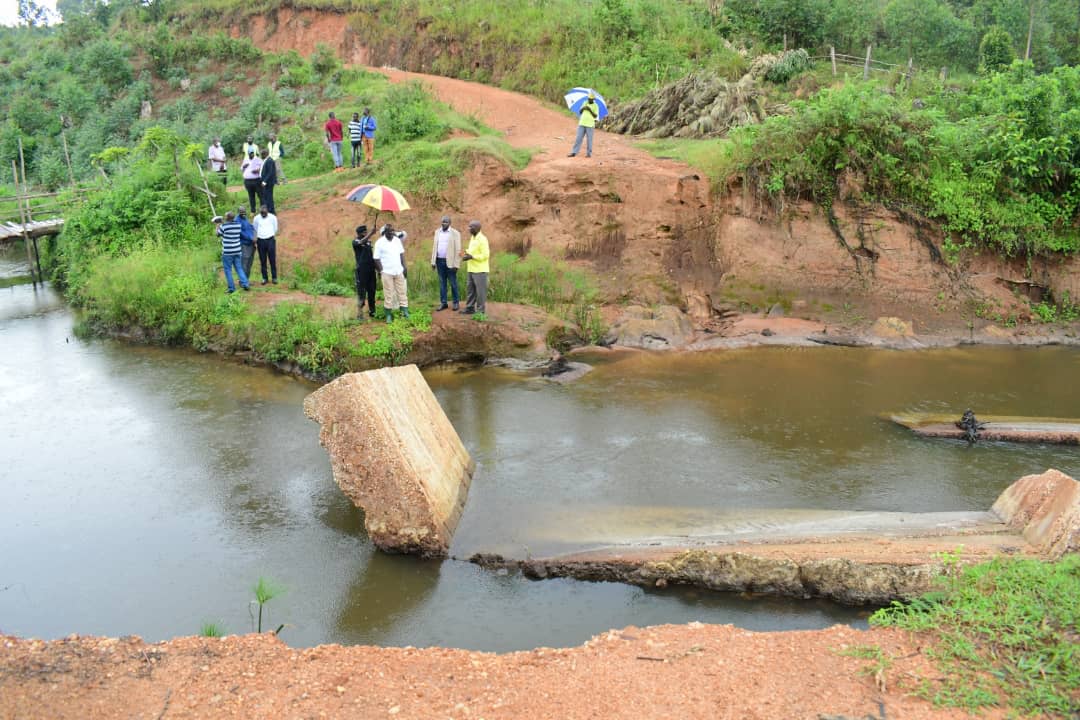 MITOOMA- The State Minister for Works Musa Ecweru on Friday travelled to Mitooma District to assess the state of the roads in the area following a concern raised by Deputy Speaker of Parliament Thomas Tayebwa about three weeks ago.

The Minister has promised quick action to restore a critical Ncwera bridge that was washed away leading to lack of communication between Ruhinda North and Ruhinda Constituency in Mitooma District.

“The Deputy Speaker of Parliament the Rt. Hon Thomas Tayebwa has brought to the attention of the government this critical bridge crossing. This is a bridge that he must pass to easily connect to his Constituency. Immediately I return I am going to start a discussion at the level of top management where we take major decisions in the Ministry” Ecweru said.

Ecweru who was accompanied by Members of Parliament from Mitooma,LC5 Chairman Benon Karyeija and a team of Engineers from the Ministry of Works and Transport said that a critical assessment of the bridge shows that it needs immediate action so that the farmers can easily transport their produce to the market.

He said that after assessing the bridge and the crossing road of Kizinda- Nyabubare-Rutookye-Kisizi-Bitereko-Rwempungu-Kati-Omukyapa, the team has taken serious concern hence a need for response.

“It is true that it (the bridge) has been washed off and now I have confirmed. I saw the pictures but to see is to believe. My technical people, the engineers, came and they have done a preliminary assessment in the sense that given the critical nature of the bridge, we must go and look at it critically and treat it as a priority” he said.

Adding that; “I am here to support my deputy Speaker and the community which is very active in producing coffee, tea and all other commodities that make my country great.

We will prioritise some of the areas like the bridge because the department of bridges in the Ministry of works is here with me and then force on account will work on those other roads to make them motorable”.

The Minister and the team also assessed several roads in Bushenyi District that are critical in leading tourists to the escapements of the rift valley as they embark on touring some parts of the Queen Elizabeth National Park.

He said that action on these roads will also be taken based on the assessment report that will be compiled by the technical team that he travelled with.

While presiding over the plenary sitting on May 11, the Deputy Speaker who can neither debate nor raise matters of national importance by virtue of his position, noted that the roads in Ruhindo North which he represents were in a bad state and needed urgent government intervention.

He was responding to a matter raised by Kole South MP Peter Ocen who decried the impassable roads as a result of the most recent rainy season that washed most of the roads in Kole District.

Ocen reported that because of the bad roads some of the school going children were missing out on lessons since they could not manage to connect from their homes to the schools.

It was at that point that Tayebwa chipped in with a concern of his own saying he had failed to go back home in Ruhinda North because he would need about 40km to connect from Kizinda in Bushenyi to his Bitereko home in Mitooma.

“Now, even here, your Deputy Speaker is in exile. I cannot go home because of the road from Kizinda to Mitooma; people are rotating around it like they are going to Rukungiri. I have to do an extra 40 kilometres. You have cut us off completely”

During his visit, Ecweru agreed with the concerns of the Deputy Speaking saying had he been a backbencher legislator, the matter of the poor roads in Mitooma District would have been raised earlier on.

“ So it is our responsibility as Ministers to make sure we take care of the country but also look at areas where they might not be easy like the deputy Speaker cannot join the rest of the MPs in raising issues of national importance and yet it is critical that this should have been captured in the Hansard” Ecweru emphasized.

The Minister added that it is the duty of the Ministries to respond and take care of such issues that affect the constituencies of Presiding Officers as soon as they come to the attention of the Ministers.

Speaker Among Hails Nabeta For Being a Great…