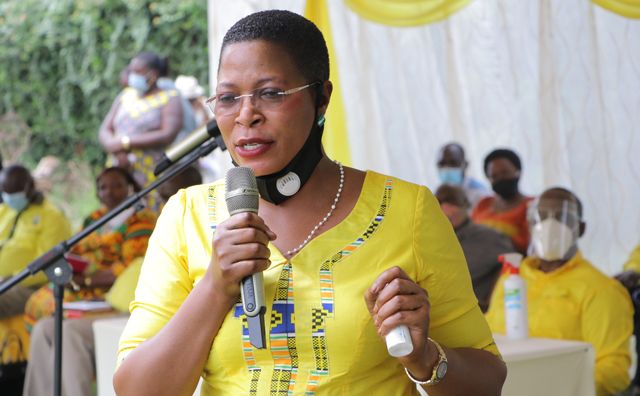 PARLIAMENT-The National Resistance Movement (NRM) flagbearer, Anita Among, has today won the race for the speakership of the 11th Parliament. Anita, who also doubles as Bukedea woman Member of Parliament, was declared winner after thumping her rival, the Opposition’s Asuman Basarirwa, who only managed to score 66 votes. She now replaced former speaker Jacob Oulanyah, who was pronounced dead On Sunday after battling a strange illness for a few months. Anita, who has been deputy speaker for less than a year, was endorsed by her party’s top Central Executive Committee (CEC) on Wednesday. About 12 candidates from the ruling NRM party had also expressed interest in the seat. However, some of them declined and withdew their candidature in favour of Anita. Today’s election that was conducted at Kololo Independent grounds saw, the former deputy speaker scoop almost all the votes. What has however surprised many is the way MPs voted something that has left everyone wondering why the entire opposition could not vote one of their own. It should be remembered that the opposition has about 104 Members of parliament but surprisingly, their favourite candidate only managed to scoop a paltry 56 votes. We are yet to find out who among the opposition MPs betrayed their camp.

Profile of the new speaker Anita Among

Born on November 23, 1973, Anita is a Ugandan lawyer, accountant and politician. She will serve as Speaker of the 11th parliament from 2022 to 2026. She also concurrently serves as the elected Member of Parliament for the Bukedea District Women Constituency, the same position she held in the 10th parliament (2016–2021). She was in FDC party before she joined the ruling NRM where she was voted as the Deputy speaker of the 11th parliament. She attended local schools for her elementary and secondary education. She graduated with a Bachelor’s degree in Business Administration from Makerere University, in 2005. In 2008, she was awarded a Masters degree in Business Administration degree, also by Makerere University. In 2018, Anita graduated from Kampala International University, with a Bachelor of Laws (LLB) degree. At that time, she was in the process of attaining qualification as a Chartered Certified Accountant.

From 1998 until 2006, Ms Among worked at Centenary Bank, one of the large commercial banks in the country. At the time she left in 2006, she had risen to the rank of branch manager. For the ten years prior to her election to parliament, she served as a lecturer in accounting, at Kampala International University.  For two parliamentary election cycles in 2007, when Bukedea District was created, and 2011, Among lost the District Woman Representative seat to Rose Akol of the National Resistance Movement political party. Among, a long-time member of the opposition Forum for Democratic Change political party, ran in 2016 as an independent candidate. She won and is the incumbent MP.

In 2020, she joined the National Resistance Movement (NRM) after falling out with her party FDC and won the party primaries. In the 2021 general elections, Anita was one of the few legislators who was elected unopposed to join the 11th parliament though her victory was contentious because the Electoral Commission blocked some of her competitors from nomination. She has become the 2nd woman to occupy the seat of the speaker of parliament of Uganda after former speaker of the 10th parliament Rebecca Kadaga.